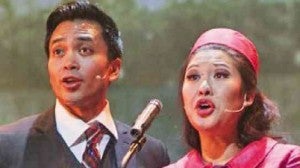 For us, however, its staging has re-affirmed the exhilarating power of the theater as a platform for discussion and reflection—because it isn’t the first time that we’ve come across the material: On April 23, 2010, we wrote about Byrne’s 22-track recording that features, among others, Cyndi Lauper, Natalie Merchant and Tori Amos.

The two-CD song cycle has ironed out much of its awkward phrasing and has since evolved into a cohesive, disco-fueled musical-theater piece that doesn’t merely examine the intriguing dichotomy of the Rose of Tacloban who, in 1954, following an 11-day courtship, married Ferdinand Marcos (Jose Llana) after he swept the ex-beauty queen off her feet.

In the musical, the protagonist’s life-changing moments come one after the other:  It recalls how 8-year-old Imelda and her five siblings were left to the care of their nanny, Estrella (Melody Butiu), when their mother died at age 36.

Two years before meeting Marcos, Imelda allegedly met her first serious boyfriend named Ninoy Aquino (Conrad Ricamora), a hard-hitting reporter with political ambitions, who left her, “because I was too tall.” Later, she also felt betrayed when Dovie Beams, an American starlet, released a very revealing audio recording of her reported trysts with Marcos—a section of the play that is particularly “discomfiting.”

The Philippines’ dark period began after Ferdinand Marcos was elected president—it didn’t take long for his oppressive government to turn democracy into a dictatorship, which officially began when he declared martial law in 1972.

The dire situation then spiralled further downward when Aquino was assassinated in 1983—a national tragedy that served as the impetus for the peaceful People Power revolution that overthrew the Marcoses in 1986.

As the narrative follows the couple’s rise and fall, its interrelated snippets are told in song (and dance) as seen through the eyes of the strongman’s willful muse—a series of events that examines the anatomy of greed and corruption and, on an intimate level, of dreams fulfilled and lost.

The themes may seem heavy, but the throbbing percussion of disco music, contemporary pop, alternative and electronica makes them accessible and easy to comprehend, even for foreign viewers.

The lyrics are sometimes overwrought, but you’ll gloss over them as they slide through the melodies’ insidiously catchy hooks.

You’ll find yourself humming along with Estrella’s bittersweet “How Are You?,” the irresistible “Eleven Days” (about the Marcoses’ whirlwind romance), the anthemic “Here Lies Love,” and “Walk Like A Woman,” about Imelda’s transformation—from being the shy lass from Leyte to the presidential spouse who would soon be known as the Iron Butterfly.

Timbers fills the venue with video screens and monitors, and often breaks the fourth wall, as well as the concept of proscenium-style staging, as he constantly shifts the action from the elevated stage in front, to the back of the performance venue—everything happens onstage and on the dance floor! There are no chairs, so the audience moves along with the 13-actor ensemble as they reconfigure and split the set pieces from one scene to the next.

The amused viewers often find themselves part of the ingeniously staged action—at one point, they’re among Marcos’ supporters; later, they’re with the angry mob that drives the dictator and his family away! As staging and choreography go, you won’t find a more immersive and inventive show.

The hard-working ensemble, composed mostly of Fil-Ams, takes on multiple roles, but their energy hardly wavers despite the ceaseless shifts in blocking and emotional tone. Llana and Miles are gifted with strong, soaring voices and a charismatic presence that draws viewers’ attention to them, especially when they begin to go “off the beaten track.”

In “Why Don’t You Love Me?,” Miles is particularly heart breaking as she looks genuinely perplexed by the rejection and outrage of the people she claims to have served well. The musical is as entertaining as it is disturbing—especially for this writer, because the situations hit close to home.

Oskar Eustis, The Public Theatre’s artistic director, shares that Byrne and his group began planning for the staged version since 2010, after the album was released: “The Marcoses used their jet-setting lifestyle to put a glamorous facade on a dictatorial regime. The real protagonists of the thrilling People Power revolution are the Filipino people. In their country, we saw that there’s no room for despair, even when the world looks darkest!”

After the show, Llana, who was only 3 when his family migrated to the US in 1979, told us that playing Marcos was a hard nut to crack—but, he had to find “compassion” for the fallen strongman: “My parents were activists—and I was a martial law baby. It’s my job not to give my performance any false pretense—I had to show the dictator Marcos was.

“It’s wonderful to have David and Fat Boy Slim writing a story about us—it’s a tribute to the Filipino people. It’s important to remind ourselves how we toppled an oppressive government—and that it was the right thing to do!”