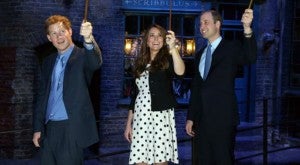 Britain’s Kate the Duchess of Cambridge with her husband Prince William, right, and his brother Prince Harry raise their wands on the film set used to depict Diagon Alley in the Harry Potter Films during the inauguration of “Warner Bros. Studios Leavesden” near Watford, approximately 18 miles north west of central London, Friday, April 26, 2013. As well as attending the inauguration Friday at the former World War II airfield site, the royals will undertake a tour of Warner Bros. “Studio Tour London – The Making of Harry Potter”, where they will view props, costumes and models from the Harry Potter film series. (AP Photo/Chris Jackson, Pool)

ORLANDO, Florida—Fans of Harry Potter and magic, rejoice: Universal Orlando is expanding its Wizarding World of Harry Potter with a new area based on the books’ fictional scenes in Diagon Alley and London.

Universal Orlando announced Wednesday the new area will open in 2014.

“For Harry Potter fans, this is an opportunity to go to multiple places that are iconic places within the story,” said Mark Woodbury, president of Universal Creative for Universal Parks and Resorts. “And people that were really not big fans of the franchise came to the Wizarding World of Harry Potter and were immersed in the environment and really thought it was marvelous. We have the same expectation to take them on additional journeys.”

It will be built on what was the “Jaws” ride in the Universal Studios Florida park, which is next to Islands of Adventure — where Hogwarts and Hogsmeade are located.

Park officials said the two areas will be connected by the Hogwarts Express train, just like in the books and films.

The new Diagon Alley area will feature shops, a restaurant and an attraction based on Gringotts bank, which, in the J.K. Rowling series, is run by goblins.

Universal said it is working with Warner Bros. and the production design team from the Harry Potter films, just like it did for the Hogwarts and Hogsmeade themed area.

“I’m so pleased that The Wizarding World of Harry Potter has proved so popular to date, and I’m sure that the attention to detail in creating the new Diagon Alley area will make this an even better experience,” J.K. Rowling said in a news release.

The Wizarding World of Harry Potter – Hogsmeade opened in June 2010.