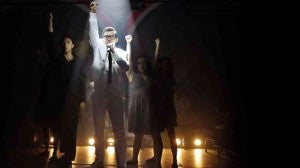 CONRAD Ricamora is being compared to Elvis Costello and David Byrne. His reaction: “Awesome. I’ll take it.” photo by Joan Marcus/The Public Theater

LOS ANGELES—Vogue raved about him as being “terrific.” The New York Times found him “very good.” Conrad Ricamora, Filipino-American actor currently generating acclaim as the late Ninoy Aquino in David Byrne’s hit off-Broadway musical on Imelda Marcos, “Here Lies Love,” exclaimed about the pressure of playing the national hero: “If I thought about playing Ninoy the icon and national hero every day, I wouldn’t be able to get out of bed in the morning!”

As I write this, Conrad, Ruthie Ann Miles, who plays Imelda in “Here Lies Love,” Tom Hanks (for his play, “Lucky Guy”), Rob McClure (“Chaplin”) and several others have just been named by Theater World Awards among the winners for outstanding Broadway or Off-Broadway debut performance in the 2012-13 theatrical season. Conrad, a California native, said, “It’s a huge honor to be in the same sentence as Tom Hanks and Ruthie, and fellow Philly actor Rob McClure!”

To its credit, the “Here Lies Love” cast, not just Conrad, and the show itself, have been winning praises since it opened at The Public Theater in New York City last month. “Here Lies Love,” propelled by Byrne and Fatboy Slim’s pulsating music, Alex Timbers’ inventive direction, David Korins’ highly creative scenic design (the actors, audience and stages move in various combinations around the room, which is done a la disco club, throughout the show) and Clint Ramos’ costumes, has been extended for a third time, to June 30. While the show is a sobering eye opener for the new generations about the misdeeds of the Marcoses, it is, ironically, also an exhilarating experience. The show (ticket information on http://www.publictheater.org) has already scooped multiple nominations from the Drama League and Outer Critics Circle Awards.

I watched the show on April 27. Jose Llana shone as Ferdinand Marcos, of course, but it was also gratifying to watch Conrad, Ruthie (it is tough to fill the Imelda’s larger-than-life shoes, so to speak, but Ruthie does that nicely) and Melody Butiu (memorable as Estrella Cumpas, Imelda’s childhood nanny) and the rest of the talented cast.

Light-footed, dressed in a white suit, sporting black-rimmed glasses like Ninoy’s, Conrad commands the stage in his numbers. Born in Santa Maria, California, Conrad, whose dad Ron Ricamora (mom is Debbie Bolender) was in the US Air Force, told me via e-mail that he remembers himself “always singing and dancing” as a kid.

“My dad used to DJ the Friday night youth center dances on the Air Force base,” recalled Conrad, who was in the cast of Lea Salonga and George Takei’s “Allegiance” at the Old Globe Theater in San Diego. “I would always enter the dance contest with friends. My biggest inspiration was my dad. He was always goofing off with my older brother and me and doing silly voices and impressions. That sense of play stays with me in everything I do.” 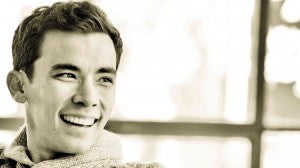 But while growing up “all over the place”—Iceland, Denver and Florida—Conrad switched to playing sports. He went to Queens University in Charlotte, North Carolina on a tennis scholarship and earned a BA in Psychology.

“I didn’t pick up acting until I was an undergrad and took an acting class,” Conrad said. “It was electrifying how an author’s words could run through me to an audience and we could all experience universal human truths together. I was hooked from then on.” He studied at the Film Actors Studio in Charlotte; the Walnut Street Theater in Philadelphia; and graduated with an MFA in acting from the University of Tennessee in Knoxville in May 2012.

Conrad, who hasn’t been to the Philippines, said, “I am looking forward to visiting one day. I’m slowly learning Filipino from my fellow cast members.”

On his father’s Filipino family, he shared, “My dad was born in Manila. He was adopted and we are in the process of discovering the details of where his biological family is from, so that’s pretty exciting. He moved to the United States when he was 10.”

Below are excerpts of our e-mail interview with Conrad:

What was your reaction when you read the reviews—The New York Times’ Ben Brantley (“A very good Conrad Ricamora”) and Vogue’s Adam Green (“The terrific Conrad Ricamora looks like a cross between Elvis Costello and Byrne himself”)?

Ha! I didn’t read the reviews! I heard we got generally good reviews but didn’t hear any specifics until you mentioned it. That’s awesome! I love reading Ben Brantley’s reviews. I like the way he talks about craft in addition to just reacting to shows. So it’s cool to hear he liked what I did. And being compared to David Byrne and Elvis Costello?! Jesus. I’ll take it.

Ninoy Aquino is an icon and national hero. What were your initial thoughts and trepidations, if any, about playing such a revered public figure?

Wow. If I thought about playing Ninoy the icon and national hero every day, I wouldn’t be able to get out of bed in the morning! He continually put his country and his belief in freedom before himself. But as an actor, I just put myself in his shoes in different circumstances throughout his life (coupled with the research I’ve done on him and the times he was living in) and then let it fly with the rest of the cast every night. That’s the beauty of working with Ruthie and Jose and all the great actors in this cast. They give so much onstage that it’s not hard to invest in this world every night.

What were your discussions with David Byrne and Alex Timbers, for instance, in deciding your approach to the role?

David had such integrity in writing this piece. He really researched and listened to what the story was wanting to say. I love that. We both brought in speeches and interviews with Ninoy, and worked together to see what best served the story.

Alex really helped me shape the way I would communicate as Ninoy. I knew from the videos I had watched that Ninoy was a master at delivering very serious and important information and ideas with humor and accessibility that people were really able to connect with. Alex was a great outside eye to help me balance all those elements.

What did you know, if any, of Ninoy Aquino before “Here Lies Love”?

I knew more about Cory Aquino and her rise to power through the People Power Revolution. That was more [marked] during my childhood than Ninoy’s story, although her story really was a continuation of his. It was great to learn through “Here Lies Love” about the history of the Philippines. It’s beautifully complex history—something that gets lost on a lot of us first- generation Filipino-Americans.

Have you heard from any member of the Ninoy Aquino family about your portrayal of Ninoy?

During the second week of previews, one of Ninoy’s nieces quietly came up to me and said she loved the show and that I did a great job. I was floored. She was shy and didn’t want to stick around for pictures, but I’m glad she introduced herself.

What are you looking forward to about performing with the cast in the Obie Awards on May 20?

Through the Obies, I’m just excited to share a small snippet of our show with other industry folks who may not be able to make it to our show because they are performing in their own shows. I’m also looking forward to just chillin’ with my fellow cast mates and the creative team. We all love each other so much that it’s stupid.

What have been the highlights so far of your “Here Lies Love” experience?

The highlight of this experience is, hands down, the people coming to me after the show to share their own experiences of the People Power Revolution, Martial Law rule and how they marched during Ninoy’s funeral.

(E-mail the columnist at [email protected] Follow him at http://twitter.com/nepalesruben.