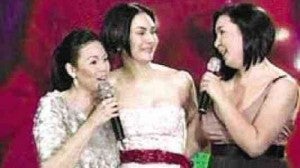 MANILA, Philippines–Yes, that was Marjorie Barretto in those controversial photos that came out in tabloids and various websites recently.
Lawyer Lorna Kapunan confirmed this with the Inquirer Tuesday night. “When Marjorie was asked about it, she denied as she had not yet seen the pictures. But when the photos went viral, she saw them and confirmed to us when she retained us as her lawyers,’’ Kapunan told Inquirer Entertainment.
Kapunan has asked a certain Mr. Blogger to remove two photos of the actress from his site or else face possible legal action.
In a demand letter, Kapunan said the publication of the photos, which she described as “very private and not intended for public consumption’’, is a clear violation of Barretto’s Constitutional right to privacy and blatant defiance of Republic Act No. 9995, also known as the “Anti-Photo and Video Voyeurism Act of 2009.”
Kapunan said the publication of such photos, dubbed in social media as a “photo scandal’’ on Barretto, is punishable under the law.
Here ‘s Kapunan’s demand letter in full:
“Dear Mr. Blogger,

We write on behalf of our client, Ms. Marjorie Barretto.

We received information that you have made public a write-up and two (2) very private photos of her, which were not intended for public consumption.  In this connection, please see attached pdf copy of the formal demand letter addressed to you.

Please note that your publication of said article and the photos in your blog site is a clear violation of our client’s Constitutional right to privacy and a blatant defiance of  Republic Act No. 9995 also known as the “Anti-Photo and Video Voyeurism Act of 2009.” Be informed that RA 9995 clearly and categorically punishes the act of publishing or broadcasting, or causing to be published or broadcasted, whether in print or broadcast media or through the internet, the photo of a person showing her private areas. To emphasize, the subject photos were intended not to be made public and your dissemination of these private photos was without our client’s consent.

The matter of the dissemination and uploading of the afore-mentioned photos is already the subject of an investigation by the National Bureau of Investigation. We are taking all legal steps to ensure that the right to privacy of our client is respected. We will pursue all the appropriate legal actions necessary to ensure that those principally responsible for this criminal action are punished.

In view of the foregoing, we ask that your write-up about our client and the subject photos be immediately taken down and removed from your site. Otherwise, we will also be constrained to file the necessary actions against you.”