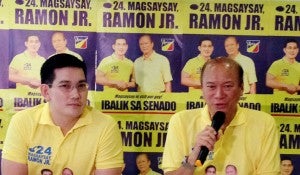 MANILA, Philippines – Don’t fall for candidates with a “bad boy image,” they are just for movies, so said actor Richard Yap popularly known as “Ser Chief.”

At a press conference in Makati City on Tuesday, Yap called  on the people not to vote for candidates  who have a “bad” track record or those sporting a “bad boy image.”

“When it comes to things like this, endorsing candidates, wala sa pera ’yan. Nasa bilib mo sa tao,” he said.

“I’m not doing this for the money. In fact, like what the senator said, this is free and voluntary. We are doing this because I want to bring him back to the Senate. Kasi  Kailangan natin ng tao na may integrity, may track record, yung malinis image (Because we  need someone  who has integrity, track record, good image),” Yap said of former Senator  Ramon “Jun” Magsaysay Jr. who was also at the press conference.

(We should not bring back those people who have bad records. We should be able to discern for ourselves who should be in the Senate. Those who have bad image are just good for movies. But in real life, it should be the good guys who you should be voting for.)

(We all know that some women are also attracted to bad boys   but they end up being beaten up by these toughies.  Let’s go for the real man. You will know that these are the people who can help  you and they are sincere in doing this for you.)

Asked to identify those who are now in the Senate with a “bad boy image,” the  actor said:  “I don’t think it would be proper to name names so  kayo na lang. I think we all know there are some people who have the track record that speaks for itself. Malalaman nyo naman.  So nasa inyo na yan. I think we are very mature voters already .”

Yap disclosed that there were other candidates who asked  for his help, some he said  had even asked him to name his price in exchange for his endorsement but  he opted to  voluntary support Magsaysay for free.