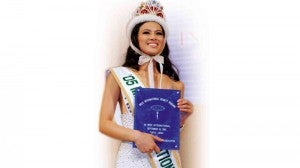 “The pressure when you’re onstage, unsure of what to say, is indescribable,” says Quigaman, 2005 Miss International. “The candidates are told each year to prepare by reading up on current events. All the contestants should have expected that question on the RH [Reproductive Health Law].”

Quigaman was referring to the question asked at the recent Bb. Pilipinas pageant by judge Gloria Diaz, 1969 Miss Universe, on whether one could still be a good Catholic while supporting the RH Law, which the Catholic Church opposes.

“I know her,” Quigaman said of contestant  Amanda Noelle Navasero, who was asked the controversial question. “She’s very smart—that should have been an easy question for her, but I guess she got too nervous.”

She observed that competition has gotten fiercer. “The contestants now are unlike those during my time, who were mostly shy and demure. Now, the girls are ready for anything. Their bodies are already in great shape. I remember I started taking the gym seriously only after I won.” 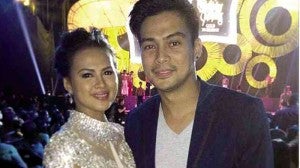 Quigaman is  the fourth Filipino to have won the Miss International crown—after Gemma Cruz (1964), Aurora Pijuan  (1970) and Melanie Marquez  (1979). These days, Quigaman is busy with TV acting and taking care of her newborn, Noah Lamar Alcaraz. During a media gathering for Anmum milk, of which Quigaman is an endorser, she talked about how she and husband, actor Marco Alcaraz, have been adjusting to their new role as parents.

How are you as a mom?

Very protective. I don’t feel secure leaving Noah with anyone, even with Marco. I’m always scared he’d drop the baby. But although he comes across as happy-go-lucky, Marco wakes up readily when it’s his turn to feed the baby.

How are you adjusting to everything,  now that you have Noah?

We don’t have a yaya. Marco and I take turns caring for him. This is why we can’t just go out when we want to. Our lifestyle change has been drastic. We have to think of the baby in everything we do. 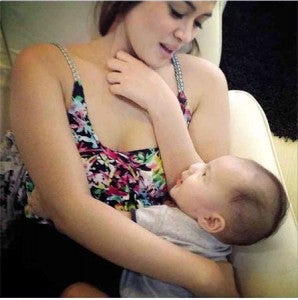 Was your delivery difficult?

I wanted a normal delivery. Marco brought me to the hospital Nov. 9. My doctor gave me an epidural [anaesthesia]—it didn’t work. I felt every single contraction. The hospital said I was a rare case. Ten hours later, at an opening of seven cm, my doc said I wasn’t progressing. Plus, I had fever. I needed an emergency Cesarean Section. I didn’t want it, knowing that recovery is slower if a woman delivers by CS. I kept crying.

What was the most difficult part of your pregnancy?

The first part, because I had to keep it hush-hush. We were wed civilly on Jan. 1, 2011. I couldn’t tell anyone about the pregnancy until the big wedding day. It was hard because even while pregnant, I still had to work. I had to run part of the time, kneel in the mud, bathe in the rain. However, I made sure to do my research. I understood how a mom’s body is able to make the baby feel safe.

I also remember feeling a little bit depressed while pregnant. There were times when I felt ugly and fat. My husband was a big help, binobola pa ako. He would say, “You’re still the prettiest woman for me.” Dealing with the emotional aspect was more difficult than the physical.

They say a woman feels more fulfilled after she has become a mom. Is this true for you?

I’ve always dreamed of becoming a mother. Now, I feel this joy that’s very hard to describe. I kept thinking how awesome it is to be gifted with a child that sometimes I feel I don’t deserve.

What would you advise  moms-to-be?

I want them to enjoy their pregnancy. I’ve met pregnant women who worry about every little thing. I keep saying, if you know that you’re doing things right and eating the right food, there’s no reason to worry. If you do, the baby gets affected, and that’s not good. The baby feels whatever you are feeling.

Did Marcos Jr. serve his sentence?