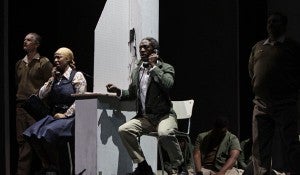 Aubrey Lodewyk, right, plays Nelson Mandela talking on a phone with his with his wife Winnie, played by Philisa Sibeko, left, in prison during a dress rehearsal of the new opera "Mandela Trilogy" in Johannesburg, Friday, Aug. 12, 2011. "Trilogy" action moves from Mandela's boyhood village in southeastern South Africa, to the Johannesburg townships where he became a political leader and to the prisons where he spent 27 years. It ends triumphantly, with Mandela's 1990 release and stirring speech to a crowd in Cape Town. AP

The range of musical styles in “Mandela Trilogy” reflects South Africa’s mix of cultures, the production’s writer and director Michael Williams said in an interview before a dress rehearsal on Friday.

After preliminary runs in the eastern coastal city of Durban and the heartland town of Bloemfontein, the Cape Town Opera’s production comes to South Africa’s economic and entertainment hub Saturday.

The sweeping action of “Trilogy” moves from Mandela’s boyhood village in southeastern South Africa to the Johannesburg townships where he became a political leader and then to the prisons where he spent 27 years. Mandela is shown cheating on his wife, making political missteps and struggling with the burden of holding others’ lives in his hands.

“Mandela Trilogy” ends triumphantly, with Mandela’s 1990 release and stirring speech to a crowd in Cape Town.

The scenes in the village allow the singers to showcase the hymn-like power of African choral music. As the setting moves to Johannesburg, it’s clear that African jazz easily crossed the boundaries apartheid tried to draw between black and white, African and European. The classical sections, said Philisa Sibeko who sings the role of Mandela’s second wife, Winnie Madikizela-Mandela, draw on opera’s storytelling strengths.

“It’s visual, it’s audible, and it’s got all these emotions involved,” said Sibeko, who grew up in a Cape Town household led by her great grandmother, who conducted African choirs.

South Africans have made opera their own. Sibeko is the second singer to take the stage as Madikizela-Mandela this year. In April, another creative team brought “Winnie the Opera” to South Africa’s national theater in Pretoria, the capital.

A South African “Carmen” opened in New York in 2004 and a film version won an award at the Berlin Film festival the next year. A South African “Magic Flute” played London’s West End in 2008.

“There is in South Africa this incredible singing tradition,” Williams said. “We have wonderful choirs here. And opera is the next step.”

A 40-piece orchestra of Western instruments backs the singers of “Mandela Trilogy.” The music is punctuated by the clashing of the fighting sticks of the Xhosa village characters, the clanging of metal cups against prison bars, and the tapping feet of dancers performing the pantsula jazz style.

The opening scene shows Mandela in prison, but not acting like a prisoner. He meets his jailers as their equal:

“May I remind you, we are not criminals, but political prisoners, jailed for our belief in a free South Africa,” he says.

In preparing to take on Mandela as an operatic figure, Williams studied biographies and delved into the official archives at the Nelson Mandela Foundation. The set is decorated with reproductions of calendars and photographs Mandela had in prison and that now are housed at his foundation. Most in the audience won’t be able to see such details, but they show the artistic team’s determination to create a realistic atmosphere. Sets use archival footage of anti-apartheid protests and a photograph of Mandela’s Robben Island prison cell projected on screens.

Williams also read histories of Johannesburg’s townships, discovering an obsession urban South African criminals in the 1950s developed for the 1948 Hollywood gangster movie “The Street with No Name.” Scenes from the movie play silently in the background during the jazz segments.

Some lyrics are taken from Mandela’s speeches and other writings. The result can sometimes seem stilted, but the words often flow poetically, as in the final scene, when Mandela and chorus sing:

“We must not allow fear to stand in our way.”

“It’s information that’s documented. It’s not gossip,” she said. She added she did not believe Mandela should be seen as a god, because that might discourage others from trying to make the right choices in life despite their frailties.

Three singers portray the anti-apartheid icon as a village boy, a young revolutionary in the city, and a prisoner who is to become president.

Aubrey Lodewyk, who plays the eldest of the three Mandelas, said ordinary people can draw an important lesson from Mandela’s life.

“He was a human being, he had his faults,” Lodewyk said. “But yet he came out as great a man as he is.”

“Mandela Trilogy” runs from Aug. 13-19 in Johannesburg. Performances are scheduled next year in Britain and Norway.