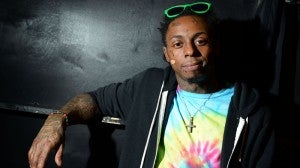 NEW YORK — PepsiCo is its cutting ties with Lil Wayne after the rapper made a crude reference to a civil rights martyr in a song.

Lil Wayne, one of the biggest stars in pop music, had a deal to promote the company’s Mountain Dew soda.

PepsiCo said in a statement Friday that Wayne’s “offensive reference to a revered civil rights icon does not reflect the values of our brand.” It declined to provide any further comment.

A publicist for Lil Wayne, Sarah Cunningham, said in a statement that the split was due to “creative differences” and that it was an amicable parting.

The controversy erupted after Wayne made the reference to Emmett Till on Future’s song “Karate Chop” earlier this year. He refers to beating someone during a sexual act and says he wants to do as much damage as was done to Till.

The black teen from Chicago was in Mississippi visiting family in 1955 when he was killed, allegedly for whistling at a white woman. He was beaten, had his eyes gouged out and was shot in the head before his assailants tied a piece of machinery to his body with barbed wire and tossed it into a river.

Two white men, including the woman’s husband, were acquitted by an all-white jury.

Till’s body was recovered and returned to Chicago where his mother, Mamie Till, insisted on having an open casket at his funeral. The pictures of his battered body helped push civil rights into the national conversation.

Wayne had sent the Till family a letter offering empathy and saying that he would not reference Till or the family in his music, particularly in an inappropriate manner.

The Till family did not immediately have a statement.

Rev. Al Sharpton, a civil rights activist, said he was still working to arrange a meeting between the Till family and company officials. Sharpton said this was a “teaching moment for corporate America, Wayne and the family of Emmett Till,” according to an email from his publicist sent to The Associated Press.