MANILA, Philippines – After singers Arnel Pineda, Charice Pempengco and Zendee, yet another Filipino singer will soon make his worldwide debut on the popular US talk show “Ellen” if plans push through.

In her invitation aired on her talk show and posted on YouTube Wednesday, TV host-comedian Ellen DeGeneres announced that she was searching for a young singer from the Philippines: “I am looking for you. Please come here. I want you to sing for me and my friends. You are amazing.” 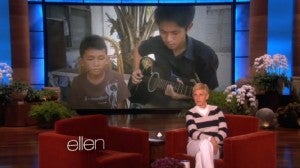 DeGeneres was impressed by the pint-sized Filipino performer who sang Luther Vandross’ “Dance With My Father” with the soulfulness of an adult R&B warbler: “How beautiful is that? Such soul in that little boy.”

In the video, which went viral in a matter of days, LA was accompanied by his cousin and guitarist James Walter Bucong, a 18-year-old college student also from the Mindanao State University in General Santos City.

The Philippine Daily Inquirer caught up with the two while they were attending and performing at a Christian youth camp in General Santos City. Talonding’s parents are church pastors.

Talonding said the response to their video and the consequent invitation from the “Ellen” show was “overwhelming.”

“We didn’t expect all this,” Talonding said in a phone interview with the Inquirer.

“We only made the video for our friends,” Bucong recalled. “We didn’t plan or intend for it to go viral.”

“My cousin James’ sister Cherry posted it on Facebook and it spread quickly,” Talonding recounted.

Had they known it would go viral, they would have made a better, more polished video, Bucong confessed sheepishly.

“We just shot it in the terrace of our home in Barangay (village) Labangal. You can even hear a rooster crowing at the end of the song,” Bucong remarked. “LA and I are neighbors.”

Bucong said that he hopes that their trip to the United States would push through. “Our papers are being processed now.”

Next week, the duo will fly to Manila, for a string of TV guestings.

“I once joined a children’s choir competition for the NAMCYA (National Music Competitions for Young Artists) in Manila. I was in Grade 6 then,” Talonding said.

Going to Hollywood, however, was a bit too big a concept for the kid to grasp as of now.

“If we will be given the chance to go to the US . . . that would be great. But I wouldn’t know where to go, which places to visit . . . I am not yet that familiar with the tourist spots in the US,” Talonding admitted.

Bucong said that another YouTube sensation, Zendee, helped “Ellen” producers get in touch with him and his cousin.

Zendee who had just released her debut CD (“I Believe”) under Warner Music Philippines since guesting on “Ellen” late last year, sent the kid’s video to the show’s staff.

“I’m glad they liked it,” Zendee said.”I just wanted to help the kid. He’s my kababayan. I’m also from GenSan. I thought LA and James were good.”

“Thank you for inspiring us and encouraging us to pursue our love for music,” said Talonding.