Freddie Highmore grows up: From ‘Chocolate Factory’ to ‘Bates Motel’ 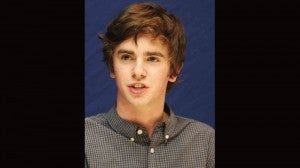 LOS ANGELES—Freddie Highmore, lead child actor in “Charlie and the Chocolate Factory” and “Finding Neverland,” has grown up and become a “Psycho” or Norman Bates in the TV series “Bates Motel,” a prequel to the classic Alfred Hitchcock film.

In real life, however, Freddie has managed to avoid the pitfalls that plague many child actors. The boy with the soulful eyes who had so impressed his “Neverland” co-star Johnny Depp so much that (Depp) recommended him to director Tim Burton for the Charlie Bucket role in “Chocolate Factory” has metamorphosed into a well-adjusted 21-year-old who studies at Cambridge and speaks Spanish, French and Arabic.

Still looking boyish, Freddie smiled often during our recent LA interview. “Having always continued with my studies and perhaps seeing my life in England as my normal life, I never moved out to America,” the curly-haired young man began talking about how he managed to avoid the child actor syndrome and stayed sane. “Acting has always been an extra or addition to my life, as opposed to my life itself—not that you never take acting seriously; of course, you do. (But) keeping that distinction keeps you grounded. I appreciate how lucky I am to have done what I have done.”

The England native credited his family—dad Edward Highmore, who has acting credits; Sue Latimer, a talent agent whose clients include Daniel Radcliffe and Imelda Staunton; and brother Albert Highmore, who is also an actor—for helping him live a normal life. “My family has been incredibly important in terms of keeping me grounded. When you’re 12, there are so many things that you want to do. Your parents are there to guide you and make sure that you make the best decisions. They’ve always made the right ones for me.” 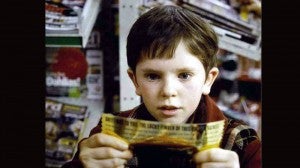 FREDDIE as Charlie Bucket, the boy with the golden ticket, in “Chocolate Factory”
photo: LONELYREVIEWER.COM

Laughing, he added, “So I’m very thankful to them for what they’ve done and their role in making sure I haven’t gone off the rails yet.” That involved going to a regular school. “I did ‘Charlie and the Chocolate Factory’ when I was 12. I was in the same school in North London, near where we live, until 18, when I finished taking all my exams at school. It seemed a natural step to go to university.”

Stressed Freddie, who was praised by his “Neverland” costar Kate Winslet as the best child actor she had ever seen: “I never went to a boarding school. I went to a normal school. You just walk in and walk back. My mom works and my dad has always just looked after my brother and me since I was born. Having that parental influence at home and having a parent when you’re home from school has been fantastic. My dad came with me to film sets so it wasn’t sort of the case of a 12-year-old sent off with a stranger for a few months.”

Freddie would have been just as happy being a full-time college student but “Bates Motel” came along. “Before ‘Bates Motel,’ I was at Cambridge full time for two years,” said the actor who played a young Russell Crowe in Ridley Scott’s “A Good Year.” “I didn’t take any time off to do films. That was a choice. I wanted to focus on my studies. It’s such a unique experience that I didn’t want to miss. We worked it out so that I could finish my studies at Cambridge and do ‘Bates Motel,’ and carry on doing that at the same time—which is the best scenario possible. I’ll definitely be able to graduate on time.” 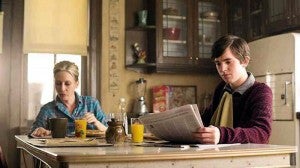 WITH Vera Farmiga, who plays his mom in “Bates Motel.”

Freddie enjoyed living for a while in Madrid as part of his studies to learn Spanish. “I was in Madrid because the third year of the Cambridge course, since I’m doing languages, is done completely abroad,” he explained.

Of his fascination with languages, Freddie said, “I did French and Spanish for five years, until I was 18. I enjoy learning languages because then I can communicate with people and gain access into different cultures that I won’t be able to do without speaking their languages, or at least attempting to. I thought I might as well take a new one so I went for Arabic, because of my interest in the culture of the Middle East and the Arabic speaking world.”

He continued: “I saw the challenge in learning Arabic— it’s based on a completely different grammatical (structure) from the romance languages that I had studied. I knew it was an opportunity that I’d never get at another point in my life.”

With his language skills, Freddie enjoys the traveling that comes with film and TV roles. “Traveling in some ways has been the best part of acting but in some ways, the worst,” he pointed out. “You spend a long time in fantastic countries. The downside is that it splits the family. You don’t see your mom or your brother for months.”

In “Bates Motel,” Freddie gained not only a screen mother (albeit a cruel one), Norma Louise Bates, in Vera Farmiga but a new best friend as well. “She’s such a wonderful person,” he gushed about the actress, who has two kids of her own.

“Vera’s kids are very lucky to have her as mom,” Freddie said. “She’s a superb actress,  incredibly effortless. You watch her and you think, how is she managing to just be there so naturally? I’m sure it takes a lot of work but it seems that it doesn’t. That marries really well with ‘Bates Motel’ because so much of what is important in the show is unsaid; it’s in the subtext.”

Freddie said it was “funny” seeing the “Bates Motel” set for the first time in Vancouver, where they shoot the A&E Television Networks thriller series. “You did get that sense of history and weight behind it. That’s what impresses me about old buildings—that sense of time and the number of people and experiences that have gone into that place. You get that sense after having done a film or a television shoot as well. They’re like different worlds that you’re a part of. But you go back to your family and it’s like you’ve never been away. Then you’re back on the set and it’s like you were never back with your family.”

The actor who played a lucky lad who wins a golden ticket to tour Willy Wonka’s magical chocolate factory was asked if he likewise earned a golden ticket to find the girl of his dreams. Smiling, Freddie had a quick reply: “I don’t have a golden girl at the moment. But we all have golden girls and then some of them don’t turn out as golden as they seemed.”

Email the columnist at [email protected]