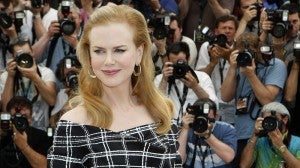 Nicole Kidman, a first-time Emmy nominee for her lead role in the TV movie, “Hemingway & Gellhorn,” said she was raised on “The Brady Bunch” and “Bewitched.” AP FILE PHOTO

Australian Kidman won the best actress Academy Award for her portrayal of author Virginia Woolf in “The Hours” while Taiwan-born Lee was named best director earlier this year for his fantasy epic “Life of Pi”.

Waltz picked up this year’s best supporting actor Oscar for his role in the Quentin Tarantino-directed “Django Unchained”, having won the same award in 2010 for his performance as the Nazi officer in Tarantino’s “Inglourious Basterds”.

The jury, headed by Spielberg, will award the coveted Palme d’Or to one of the 19 films in competition at the May 15-26 festival.