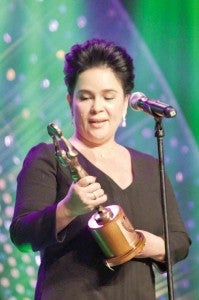 The film also bagged the best actor honor for Laguna Gov. ER Ejercito, who played Aguinaldo; best supporting actor trophy for Cesar Montano, for his portrayal of revolutionary hero Andres Bonifacio; and best director and screenplay awards for director-writer Mark Meily, among others.

“When we do something good in the movies, we always say ‘pang-Famas ’yan!’ To have won a Famas award was a dream come true. I’ve always imagined delivering a speech during a Famas ceremony. I finally did it last night,” Meily told Inquirer on Monday.

Meily admitted to feeling depressed after “El Presidente” received negative comments, specifically on Bonifacio’s depiction as a villain, when it was shown during the 2012 Metro Manila Film Festival (MMFF) in December.

“I stopped attending award shows after that incident at the MMFF. Our producer Maylyn Enriquez just convinced me to go to this one (Famas). I’m glad I did,” he said.

Meily announced that “El Presidente” (by Scenema Concept) was to be screened on June 12 in four cities in the United States—Chicago, New York, San Francisco and Los Angeles—to commemorate Philippine Independence Day. Special screenings in Filipino communities in other countries were still being finalized, he added.

The event was well-attended with only Montano (currently in Singapore) and Nora Aunor (who was shooting a film in Nueva Vizcaya) absent. Aunor is the recipient of the Presidential Award for Cinematic Excellence.

Theme of the awards ceremony, directed by Al Quinn, was “Famas at 61: Continuing the quest for film excellence.” Produced by Airtime Marketing Philippines, the show airs this Sunday on GMA 7.