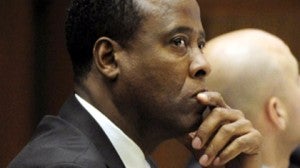 LOS ANGELES – Michael Jackson’s jailed former doctor filed an appeal Monday against his conviction for involuntary manslaughter over the US star’s 2009 death.

Conrad Murray said prosecutors failed to prove the self-styled King of Pop was on a propofol drip the day he died from an overdose of the powerful sedative, which he was using to treat chronic insomnia.

In a 231-page appeal filed by his lawyers in Los Angeles, he also alleged that the original trial judge excluded critical testimony used to convict him in November 2011.

“The jury was not allowed to learn that when Jackson died, he owed (concert promoter) AEG close to $40 million, there were more than 30 lawsuits pending against him and he owed millions of dollars” to US tax authorities, it said.

Prosecutors said that Murray, now 60, hooked Jackson up to a continuous Intravenous Drip (IV) and left him alone and unmonitored, when Jackson went into respiratory arrest.

But Murray’s attorney Valerie Wass said Murray had been weaning the 50-year-old Jackson off propofol for three days and only gave him a 25 milligram injection to help him sleep, before putting him on a saline drip.

The expected appeal was filed ahead of the imminent start of a long-awaited wrongful death trial in which Jackson’s mother Katherine is accusing the promoter of negligently hiring Murray to look after the singer.

Earlier this month Murray broke his silence to say he does not want to testify at the civil Katherine Jackson v AEG trial, to avoid incriminating himself for his own appeal.

Murray has always protested his innocence, saying he was trying to get Jackson off of propofol as he rehearsed in Los Angeles for the doomed “This is It” comeback series of concerts in London.

“I am an innocent man .. I maintain that innocence,” he told CNN on April 2, adding: “I am extremely sorry that Michael has passed. It’s a tremendous loss for me… he was very close to me .. we were absolutely great friends.”