‘Wowowillie’ in hot water once more 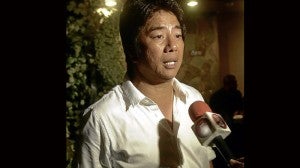 MANILA, Philippines—BLAME it on the scorching summer temperature.

For the second time in two months, controversial TV host Willie Revillame found himself in hot water, with his noontime show on Monrday slapped a rating of Strong Parental Guidance, or SPG, by the review board, for an episode that showed a female dancer named Charm wearing a “skimpy costume” that resulted in “excessive flesh exposure.”

After a hearing called by the Movie and Television Review and Classification Board (MTRCB) on Monday, Revillame’s noontime show “Wowowillie” was placed “under probation, subject to a per-episode review for three months and . . . an SPG rating effective immediately,” the board said in a statement.

The MTRCB, which called the hearing because of “excessive flesh exposure” in the show’s April 16 episode, also asked TV5 and “Wowowille” representatives “to submit reform and self-regulatory measures by May 6.”

“We acknowledged that the costume of our dancer and on-air jokes may have offended the sensibilities of some viewers,” Montelibano said. “In our sincere way of apologizing, we are exercising self-regulation and hence agreed to the board’s imposition of the SPG rating.”

Montelibano added that Revillame had promised “to refrain from jokes that may go against gender sensitivity” in its episode aired yesterday, and added that “as of last week, even prior to the (MTRCB summons), we were already more careful with the girls’ costumes.”

The “Wowowillie” official said that the dancer Charm, or Charmaine Alovera, is still with the show. “The sanction (was) not on the dancer . . . (the violation arose because of the) totality: the costume, choreography and how she was presented.”

Despite the immediate sanction of an SPG rating, Monday’s show still bore the PG (Parental Guidance) rating which, MTRCB Chairman Eugenio Villareal explained, was a result of the Monday hearing “end(ing) at early noon.”

He added: “We will make sure the show complies by today (Tuesday).”

Monday’s hearing was called because of the board’s “concern over the welfare of both women and children,” Villareal said.

He recounted that, last month, the board had summoned TV5 and “Wowowillie” representatives to a gender sensitivity seminar held on April 3, because of a controversy involving the show’s former cohost Ethel Booba.

Booba, whom Revillame castigated on air in the show’s Feb. 28 episode, also made “unsavory” remarks about another network’s talent in the same episode. She has since left the show.

Villareal said that in March 2012, TV5 had signed a Memorandum of Understanding with the MTRCB, signifying the network’s “commitment to ensure (the) decent presentation of women in media.”

Noel del Prado, chairman of the board’s ad hoc committee, said that because of the April 16 violation, the show would be subjected to a three-month probation period, (during which) a (similar) violation, after due process, (would mean) higher penalties.”

In an earlier case, the board placed the GMA 7 Sunday noontime show, “Party Pilipinas,” on a six-month probation over a “sexually provocative” dance number between actors Lovi Poe and Rocco Nacino that aired on

“Party Pilipinas,” Villareal explained, would also be “reviewed on a per-episode basis, which means that any violation of MTRCB rules, laws and regulations would mean . . . that the program (could be pulled) off the air without prejudice to other sanctions.”

Del Prado identified the other members of the ad hoc committee as Tony Veloso and Carmen Musngi.