Michael Bay on why Shia LaBeouf isn’t in new ‘Transformers’ 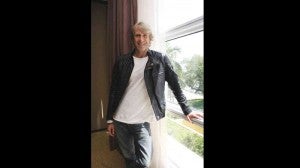 LOS ANGELES—We can imagine Rebel Wilson sitting, with a box on her lap, and looking at director Michael Bay with that sly smile, insinuating tone and knowing look in her eyes. “It was the strangest audition I’ve ever had,” Michael said of Rebel’s tryout for a part in his film, “Pain & Gain.” “She went to my office and said, ‘Hello, Mr. Bay.’ I said, ‘What do you have in the box?’ She says, ‘I have some nunchucks, because I know you like action, and you know how to use them. I said, ‘Can you have sex with those nunchucks?’ She goes, ‘Yes, yes, yes!’”

The man whose films have grossed over three billion dollars worldwide had a faint smile as he told this anecdote in a meeting room at the Mandarin Oriental Hotel in Miami, Florida. For a director who’s known for loud, high-testosterone movies, Michael seemed to be a low-key presence and spoke quietly.

Asked for his take on the public bickering between Shia LaBeouf, the star of his previous three “Transformers” movies, and Alec Baldwin (the two were supposed to star in a Broadway play, “Orphans,” but Shia quit), the lanky LA native answered, “I don’t know the full story, but I can see how it went down. I’ve worked with Alec, who is really funny, but he doesn’t suffer fools. Shia might have done something inappropriate.”

On why Shia is no longer in the next “Transformers” movie, Michael offered a long explanation: “I was going to stop doing ‘Transformers’ after doing three—because it’s hard to make a fourth movie with the same characters.”

The filmmaker, who broke through as the director of TV commercials and the music videos of Donny Osmond, Tina Turner and Lionel Richie, added, “I went to the ‘Transformers’ ride that I worked on at Universal Studios. I was in a two-and-a-half-hour line. Just to see the kids—I was like, it’s hard to leave your franchise. You see directors like Peter Jackson. He’s still in the world of his franchise, with ‘The Hobbit’ and ‘The Lord of the Rings.’ (James) Cameron called me up and said, ‘So, what’s it like—is it easier or harder?’ I said, ‘It’s harder, because you have the language figured out, now that you’re doing ‘Avatar’ 2 and 3, but you’re going to push yourself harder.’

“I wanted to do one more. I knew that the only way to make it work out was to reinvent the whole thing. There’s a reason why we have a new cast—it’s in the script. Originally, the studio said, ‘Let’s just do it with another kid.’ I said, ‘No, because everyone’s going to compare that kid to Shia, who’s like magic lightning in a bottle. He’s one of a kind!

“So, what I’m doing on this one is that Mark Wahlberg plays a young dad with a 17-year-old daughter. She has this boyfriend her dad doesn’t know about. It’s a back doorway for how to get kids into this.”

Bay refused to declare that this next “Transformers” will be the last one. “You never say never, but four movies is a lot,” he admitted. “It was so much fun to do ‘Pain & Gain’—just actors acting. These ‘Transformers’ movies involve 2,000 to 3,000 people for two years.”

While his movies rake in millions, Michael doesn’t get the respect that other filmmakers do. His movies are often lambasted by film critics. “The thing is, I see my movies around the world with audiences. I see them enjoying, laughing and applauding—so, that’s enough for me.”

Michael’s cast often cite how fast he shoots. “We did like 90 shots on the first day and in 12 hours,” Michael said of shooting “Pain & Gain.” “I’ve been doing this for 20-something years. I’m very organized. The actors like it, because they don’t go to their trailers much.”

“I’m also a hard ass,” he added with a smile. “If you come late…I’m not going to tell which one (actor). —(All right, I will. Anthony was late, OK. He was in his trailer—I just shot the scene without him. He came 10 minutes later. He goes, ‘Hey, guys.’ I said, ‘You’re out of the scene now.’ He was never late again (laughs).

On why he cast Bar, a stunner who was born in Russia and raised in Israel, in her first prominent film role (she plays a stripper who ends up with both Mark and Dwayne’s bodybuilder characters), Michael said, “She has this kooky innocence about her that was great for the part, because the woman thought she was a CIA operative. She hung around with the guys. She was sweet and very funny. She had to be trained to strip.

“There was this woman from Switzerland who didn’t have a visa—she was going to train Bar. Paramount called me, and I said, ‘We’ve got to pay her cash. She doesn’t have a visa.’ She (Paramount executive) goes, ‘We’re a publicly traded company. We can’t pay cash.’ I said, ‘Do you know any stripper trainers? Because I don’t. This is the only one I know. We have four weeks to do it.’ —So, she trained her very well in four weeks!”

Michael told that story with gusto. For someone who started so young in the film industry, he still sounded enthusiastic about sharing his experiences. He recalled, “My first paycheck was when I was at Lucasfilm. I was 15 years old. I filed storyboards and (plans for) Yoda’s house. I bought a car—a VW Scirocco. I split the cost with my dad.”