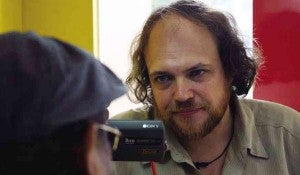 ANDREW LEAVOLD has visited the country eight times since 2006.

When Australian film buff and filmmaker Andrew Leavold first watched the 1981 Filipino action flick and James Bond spoof, “For Y’ur Height Only,” on a fuzzy VHS tape 20 years ago, he had no idea that it would lead to an obsession with its pint-sized star.

The object of Leavold’s persistent fascination is Weng Weng—Ernesto de la Cruz in real life—a 2’9” martial arts expert who held the distinction of being the “shortest adult actor in a lead role” in the Guinness Book of World Records.

Weng Weng top-billed several potboilers in the 1980s, including “Agent 00,” “The Cute, the Sexy ’n’ the Tiny,” “The Quick Brown Fox” and “D’ Wild Wild Weng” before slipping into obscurity.

Leavold has been pursuing Weng Weng’s story for the past seven years, trying to fill the gaps and overcome “mountains of misinformation” on the Internet.

For the record, he said in an e-mail interview with the Inquirer, Weng Weng did not play an alien, a tiny animal or baby Moses to Joseph Estrada’s adult Moses in early movies.

At one point, Leavold said, his “personal quest” felt like a “detective novel.”

He has accumulated over a hundred hours of footage for his documentary, “The Search for Weng Weng.”

He has visited the country eight times since 2006, chasing and landing interviews with film legends Dolphy, Eddie Romero, Cirio Santiago and Bobby A. Suarez. The pursuit took him to Malate, Binondo, Taytay, Bulacan, Baguio and, naturally, to Weng Weng’s family home in Baclaran.

Leavold recounted: “In a previous interview with (Ilocos Norte governor) Imee Marcos, I learned that Weng Weng was a frequent visitor to Malacañang during Ferdinand Marcos’ presidency.”

He also got an audience with Imelda Marcos in Batac, Ilocos Norte, last year. A “surreal” chat with the former first lady during her 83rd birthday party in July, yielded a treasure trove of anecdotes, he said. “She astounded me with a thoughtful soliloquy on Weng Weng. She said he was a beautiful, fragile soul who overcame incredible disadvantages to become someone extraordinary.”

The diminutive action star’s importance in Philippine cinema was no Marcosian reverie.

Leavold related: “During the Manila International Film Festival in 1982, ‘For Y’ur Height Only’ was the only Filipino movie that got sold for any significant amount, beating the [works] 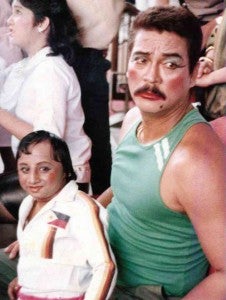 DIMINUTIVE martial artist Weng Weng and screen villain Paquito Diaz hammed it up, in drag, in a costarrer.

Moreover, the miniscule Bond’s movie was screened in different countries in the Middle East, Europe, Asia and the Americas. “It was shown in the United States and Mexico. In Trinidad, it made more money than ‘The Empire Strikes Back,’” said Leavold. It was the “triumph of ingenuity,” he noted.

To think, he said, that Weng Weng, his producers and director, did it “with one-hundredth of the budget of a regular Bond film. It’s a story the Philippines can be proud of.”

Sadly, Weng Weng died penniless and forgotten in 1992 at age 34.

For this reason, Leavold considers his interviews with two of the people closest to Weng Weng as the most enthralling.

“Eddie Nicart, Weng Weng’s director, shared a wealth of stories on making low-budget action films. But the most illuminating was my conversation with jeepney driver Celing de la Cruz, Weng Weng’s only surviving relative,” he said.

In a curious twist of fate, Weng Weng has stumbled on belated recognition on the worldwide web of late.

A music video of Canadian musicians The Chuds and John R of R Room’s “Weng-Weng Rap” has earned 1,709,133 hits on YouTube, Leavold pointed out. “The more the world learns about Pinoy B-films, the more the cult grows,” he quipped.

To finish the docu, Leavold has started a fund-raising campaign on the web site Kickstarter, the world’s largest funding platform for creative projects. 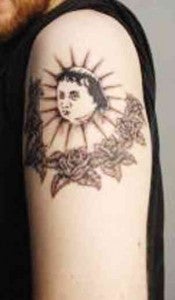 Leavold’s tattoo of the face of his “personal avatar.”

super spy: “His story is sad and remarkable Weng Weng is a metaphor for many people in the Philippine movie industry, and in post-colonial Philippines in general—used, abused, then cast aside once they had outlived their usefulness.”

But the myth persists, prevailing over third world realities, he asserted. “Like Weng Weng, this story refuses to be beaten down as witnessed by its present resurrection.”

Besides, it’s a passion that he can never ever shake off, he admitted. He even had Weng Weng’s face tattooed on his left upper arm five years ago in Malate.

“Weng Weng is a personal avatar,” Leavold said. “Most of the time, it feels like he is sitting on my shoulder, directing my film from behind a curtain—so many strange coincidences have occurred along the way.”