When Lorna T met Edita B 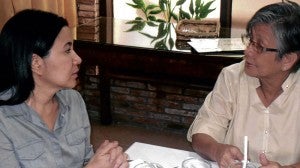 BOTH are widows who possess quiet strength, the director says of Tolentino and Burgos (right).

It helped that Edita Burgos was a regular viewer of Lorna Tolentino’s most recent GMA 7 soap opera, “Pahiram ng Sandali.”

On Wednesday, when the human-rights advocate finally met the actress who will portray her in Joel Lamangan’s indie drama “Burgos,” it felt as if they had known each other for years.

Tolentino had done her homework as well, reading up and watching videos about the crusading mother of missing activist Jonas Burgos.

“I caught Howie Severino’s interview with her. I will next watch the one with Boy Abunda,” she told the Philippine Daily Inquirer. “Only last week, I heard there were new developments in the case.”

Tolentino admitted that she was no expert on the issue of desaparecidos (people seized by the state and never seen again) and, as such, she would have to rely heavily on the script, written by Ricky Lee. 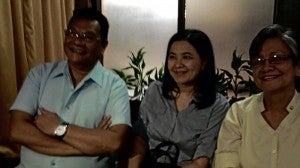 Not leaving anything to chance, Tolentino and Burgos exchanged e-mail addresses. “I told Lorna that she could get in touch with me anytime, should she ever need to clarify something in the script,” Burgos told the Inquirer.

Lamangan pointed out that the two women had a lot of traits in common. “Lorna and Edita are both quietly strong, courageous women. Lorna carries herself the same way that Edita does. They seem very detached… when facing problems. I observed that in Lorna during the wake of her late husband (action star) Rudy Fernandez.”

Burgos concurred, “That’s another thing I admire in Lorna. I also lost my husband (the late activist-journalist Jose Burgos Jr.) to cancer. Like her, I took care of my husband for months. She’s very close to her two sons, who seem very much involved in all her activities as well.”

Tolentino, for her part, is awed by Burgos’ formidable faith. “She’s a member of the House of Prayer (of the Secular Order of Discalced) Carmelites. She hasn’t given up on finding her son.”

“Edita divides her days between the House of Prayer and rallies for desaparecidos,” Lee noted. “She told me that she finds stillness even in the midst of a noisy crowd.”

To which Burgos replied, “I hold on to my faith.”

Tolentino confessed that portraying a real person could be daunting. “You need to stay true to the character.”

For a start, the actress will transform herself physically for the part. “Mrs. Burgos told me that she has been wearing her hair short for a long time.”

Tolentino has scheduled a haircut at the Fanny Serrano Salon. “In some scenes, I also need to have salt-and-pepper hair, since Mrs. Burgos has stopped dyeing her hair black. I’ll be wearing eyeglasses in this film, too.”

The mole-on-the-cheek allusion is a reference to Nora Aunor, who was originally tapped for the role.

Tolentino said she had no qualms about taking over a project previously attached to another actress. “It doesn’t matter whether I’m the first, second or third choice. Every role is a gift.”

Besides, this is not the first time. “Lampel Luis was originally cast in ‘Sinasamba Kita.’ Amy Austria was supposed to do ‘Moral,’” she recalled. Both 1980s films proved to be turning points in Tolentino’s career.

Tolentino related that she’s deeply honored to be mentioned in the same breath as Aunor. “We didn’t have a scene together in the (1982 film) ‘Mga Uod at Rosas.’ When we finally had the chance to act together in the TV5 series ‘Third Eye’ last year, I can say I was mesmerized.”

She feels no undue pressure, either, about filling Aunor’s rather snug shoes. “We’re different actresses,” she quipped. “Ate Guy (Aunor’s nickname) has her style; I have my own.”

More than displeasing Noranians, a bigger concern could be antagonizing the political forces behind the disappearance of activists.

“I am just an actress playing a role,” she explained. “I simply hope that this movie will make the public more aware of the issue. Jonas is just one of many desaparecidos. Which also means Mrs. Burgos is not alone.”