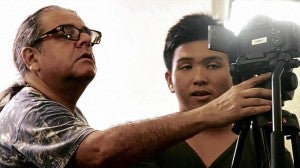 CINEMATOGRAPHER Daniel Anaya, left, says a movie has to be good, fast and cheap.

“You can accomplish so much more when you collaborate with others. Do not be ashamed to seek help,” Mexican-American cinematographer Daniel Anaya advised budding Filipino indie filmmakers.

Anaya previously worked in the camera departments of Robert Rodriguez’s “From Dusk Till Dawn” (which had Quentin Tarantino as scriptwriter and actor) and James Cameron’s “Titanic.” Last year, he worked with first-time director Ian del Carmen on the romantic-thriller “Bad Romance,” which opened in theaters on April 10.

“Filmmakers are highly competitive,” Anaya told the Inquirer in a phone interview. “But it’s also helpful to be part of a community that thrives in mutual admiration than be a lone wolf. Back home, I talk about my experiences in film production in seminars. What I always tell the audience is to hire the best people—let them do what they do best; surround yourself with talented people.”

He first ventured into filmmaking in 1976, when he held a camera for the first time. “It was a 60 mm film camera. My group and I used it for a student short film. We drove around Chicago and shot videos out of the car window,” he recalled. “I was originally a chemical engineering student. I felt I wasn’t motivated so I dropped out. That was in 1979. I never looked back.”

Now, whenever he talks in seminars Anaya often discusses what he calls the “production triangle”—or the three important elements of filmmaking.

“A movie has to be good, fast and cheap. You can’t have all three elements in a film so it’s best to allocate sufficient time to work on the project,” he said. “With an indie film, which runs on a tight budget, expect to be forced to compromise.”

Here are excerpts of our chat with Anaya.

How many sets did you have for “Bad Romance?”

Seven. We stayed at the Lima Park Resort in Batangas. We made use of the hotel’s rooms, pool, parking lot, hallway, café and kitchen.

Since this is a romantic thriller, can you describe its overall look as dark or colorful?

I was inspired by the 1994 movie “Frankenstein.” This is actually two different movies in one. The first was brightly lit and came in pastel colors. The other part obviously looks dark.

How long did you stay in the country for the movie? What were the challenges during the shoot?

I stayed at Ian’s place for two weeks. The usual problem is lack of time. We had to work on a very tight schedule.

How did you meet Del Carmen?

I met Ian in Cebu, where I lived for two and a half years. I worked on a project connected with the International Academy of Film and Television in Cebu.

What do you think Del Carmen has to watch out for as a filmmaker?

He has vision. He has strong leadership skills. He is a fan of Tarantino and isn’t afraid to say that he has borrowed the American director’s sensibility. The biggest problem of any filmmaker is not having enough time to work on a project.

Tarantino claims to be a lover of Filipino movies. What do you remember most about him?

I worked with him on “From Dusk Till Dawn” and the sequel, “Hangman’s Daughter.” What’s great about him is that he treats his cameraman as his friend.

What started your interest in film production?

I’ve worked for a TV network for 15 years. The studio had a specific way of doing things. That’s why I was very eager to shoot things differently. In doing indie films, I’m given freedom.

What were the places you visited in the country?

I stayed in Ian’s house most of the time. But I got to see party places and an underground bar.

I also tried banana beer in Makati and visited the Cultural Center of the Philippines.

I realized that Mexicans and Filipinos eat the same things. I like chicharon and also sisig . It’s one of the first Filipino dishes that I really enjoyed. It’s spicy and crunchy. They said it’s made from chopped pig’s face. I also got to try out street food like … grilled pig’s ear and chicken intestines.

I’m very adventurous when it comes to trying out food. When I was in Cebu, I loved the kinilaw and sutokil. I even tried eating young frog one time.