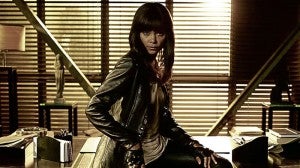 NEWTON in her new TV series, “Rogue.” The actress is also a feminist and environmentalist.

LOS ANGELES—The question thrown at Thandie Newton was fairly innocuous but her surprising answer said a lot about her down-to-earth nature: “Do you Google yourself?”

The actress proceeded to share an anecdote: “I wasn’t Googling myself. I was doing some research about someone I was working with. I clicked on IMDb. On a side panel was like, ‘If you looked at this, you might like…’ And another panel said, ‘Actresses who are supposedly attractive but who are not.’ And there was my face. I was like, what?” She broke into laughter.

Of course, she’s attractive. With a Zimbabwean mother and a British father, the London-born Thandie has soft, exotic features. She added about the pitfalls of reading about yourself in cyberspace: “Your relationship with the Internet says a lot about yourself. It’s hard enough in life to have a very relaxed attitude and to go with the flow. You get buffeted about so much. So I tend not to (Google myself).”

Thandie may speak quietly and gently but she is a passionate advocate of women’s issues. She actively supported “One Billion Rising,” the campaign to increase awareness of violence against women. The social anthropology graduate of Cambridge works with the V-Day Foundation, an organization that aids women who have been victims of sexual violence.

“Women are the greatest human commodity that there is. I also feel that there’s a very strong connection between a lot of the evils of the modern world—factory farming, abuse against women—and the environment. We’re destroying the female. If you think about the earth as a female organism which it is, in its totality, you know how we’re disrespecting and abusing it.”

She stressed that she has “very strong feelings about factory farming,” defined as “the practice of raising livestock in confinement at high-stocking density, where a farm operates as a factory” in which animals are “bred and fattened using modern industrial methods.” 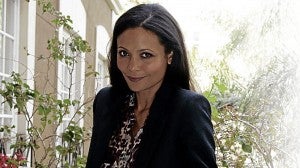 A VEGETARIAN, Newton has done research on factory farming. Photo by Ruben Nepales

“I’m a vegetarian myself,” said the actress who was raised in Zambia until political turmoil forced her family to move back to the United Kingdom. “It’s not so much about the animals. I don’t want any kind of suffering of any living form but it’s more to do with the awareness that so much of the meat on the planet is being produced by factory farms. Animals are being pumped full of growth hormones which are then getting fed to our kids. And it’s affecting the water, environment.”

She continued, “Factory farming is a larger cause of damage to the ozone than all air travel combined. This information is kept from people. I’ve done a lot more research into food. You have ‘Food, Inc.’ the documentary and ‘Eating Animals,’ the book by Jonathan Safran Foer. You read that and it informs you of everything you need to know. I think that people are being lied to en masse. Consumers have the most power, ultimately.

“We are being duped and controlled by huge multinationals that are concerned about the short term, not the long term and don’t care about the individual. You know darn well that these people would never put a piece of nonorganic meat in their mouths or their children’s.”

Thandie has two daughters,  Ripley and Nico, with Ol Parker, a writer-director (who wrote “The Best Exotic Marigold Hotel”).

It’s no surprise that Thandie was attracted right away to her detective character, Grace Travis, in “Rogue,” her first TV series. Grace is a detective in California’s San Jose but works undercover in Oakland. “She is an everywoman,” Thandie said. “That was the main thing that appealed to me. She’s not sensational in any way. She’s a hardworking detective. She’s a mother trying her best, living in Oakland. What I love about the script and the format is that she’s faced with remarkable circumstances and in order to meet them, she has to become remarkable.”

She talked some more about how the everyday “superhero” appealed to her. “In an age when we’re dealing with superheroes all the time in movies, I really enjoy trying to find those superheroes who are just among us,” she pointed out. “Everyday people who have to deal with everyday problems that can be blown out of all proportion. Regular people who uncover corruption. We all love Erin Brockovich. These are the stories that really excite me and I feel are relevant to the world we live in today. There’s escapism and then there’s getting involved with something and really learning from it. That’s what I felt about ‘Rogue.’ ”

On a lighter note, Thandie was asked about her friend, designer Stella McCartney, recently receiving an Officer of the British Empire (OBE) medal from Queen Elizabeth. “I wrote Stella a text on the way here to congratulate her,” Thandie said, beaming. “She looked beautiful when she went up for her OBE. I was like, ‘You’re an empowered woman, a mother, a global business icon, and hilarious, silly, naughty and sexy.’ She’s all these different things.”

Thandie added, “She’s also someone who will question herself—‘Do I look all right?’ She’s a real person, well-rounded, refreshing and fun. She’s just so inspiring. And the truth is, she is remarkable. But we all are, potentially. What inspires us is that little flicker in ourselves that makes us aware that we could also do that (be remarkable).”