Max Irons on his dad, Jeremy, and being compared to Robert Pattinson 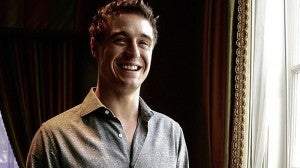 LOS ANGELES—Jeremy Irons, “goofy and geeky”? That was how his son, Max Irons, fondly described his father in our recent talk. The young actor added about his dad—with playful affection, of course, “He has a little OCD (obsessive-compulsive disorder). Yeah, I love him.”

Max, whose mother, Sinead Cusack, is also an actor, claimed that he didn’t want to be an actor until he was about 15. “I had dyslexia,” he explained.

“Then I did a Neil LaBute play,” Max continued. “It was a one-act play. We had to direct it ourselves. I realized that if I learned and prepared in advance, I could do it. It was the most fun I could have at school without breaking any rules.”

Max said his parents are fully supportive of his acting career. “They recognize that I make my own mistakes,” he shared. “I need to have my own victories. So they let me do that. They don’t give too much advice except for the business side of things.

Admitting that he’s “a mother’s boy,” Max said that his mom is “quite nervous for me.”

He explained his mother’s apprehension: “I was interviewed a while ago by somebody whose first question off the bat was, ‘You’re doing OK but you’re not going (makes a swooshing sound). How do you feel about that?’ I think what he was referring to was ‘Twilight’ and the idea of success in a lot of people’s minds is, you get a role, you go from 0 to 100 overnight.

“You start getting paid disproportionate money in terms of experience and perhaps even talent. You can be used, abused and thrown under the bus the next day for whatever reason. When I look at actors like my mother and father, they never started like that. They took small parts with good directors and scripts. They built a solid foundation of work and experience which allowed them to build the career they now have.”

According to Max, it’s a different game now. “You fail so publicly and you’re so replaceable.”

In his new film, “The Host,” adapted from the novel by Stephenie Meyer, there’s plenty of kissing. Saoirse Ronan and Jake Abel also star in the Andrew Niccol-directed action-adventure-romance about aliens taking over human bodies. Ribbed about all the smooching, Max said, “Thankfully, we are all friends. There was no competition. There was a lot of laughter on the set.”

On being touted as the next Robert Pattinson or being compared to the “Twilight” actor, Max remarked, “There are two sides to every coin. He’s lost a lot of personal freedom. His life is under a microscope. But then again, he’s working on a great movie called ‘The Rover’ at the moment. He has worked with David Cronenberg (‘Cosmopolis’). He’s going to work with him again (‘Maps to the Stars’). That’s all you want as an actor—to keep working with good directors, scripts and actors. The success of ‘Twilight’ has afforded him that privilege. We should all be so lucky.”

Following the movie’s premise, if he can also put himself in another body, who would he choose? “Jay-Z,” Max said with a grin. “He’s quite fun. He’s got a pretty wife (Beyoncé). You get to play music in front of huge audiences.”