David Byrne on his musical about Imelda Marcos and cooking ‘adobo’ 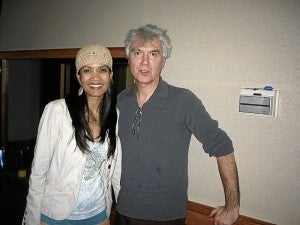 DAVID Byrne and Charmaine Clamor, who sang in his album version of “Here Lies Love”

Set in a dance club atmosphere at New York’s Public Theater as a nod to the former Philippine first lady’s love for the nightlife, the show’s preview performances are ongoing, with opening night scheduled on

“The audience danced, as I’d hoped they would, and were engaged in the story at the same time!” exclaimed the Rock and Roll Hall of Famer and creator of the highly regarded record label, Luaka Bop. “I heard one couple say they were coming back. We are making small changes [so] the audience can understand the story and history a little better. We have to somehow explain, for example, what Proclamation Order 1081 (Marcos’ declaration of Martial Law) was, what it meant.”

For more information about “Here Lies…,” which is directed by Tony Award nominee and Drama Desk and Obie Award winner Alex Timbers, visit www.publictheater.org. Below are excerpts of our e-mail interview with David who, it turns out, loves and cooks adobo and has been to Ilocos and Tacloban:

When did you first become aware of Imelda Marcos?

In the 1970s, I was [already]  aware of Imelda and Ferdinand. I remember that my opinion of Andy Warhol dropped when I saw that he and his entourage were hanging out with Imelda, the Shah of Iran and other “bad” people. I didn’t know much about her or the Philippines at the time— like many of my friends, I was accepting the leftist conventional wisdom, some of which was undoubtedly true, and some of which was more complex than what I believed then.

What launched the idea for a musical on Imelda?

I had read a book called “The Emperor” and was impressed with how surreal, ritualistic and theatrical the bubble world of a powerful person was, and when I read that Imelda loved going to discos I thought, “Ahhh, here is a powerful person who comes with her own soundtrack!” I wondered if there was a story, though, so I began to read books about the Marcos era.

What were the most useful sources in your research?

At first, I relied on books: “America’s Boy,” “Waltzing With A Dictator,” “The Conjugal Dictatorship,” “In Our Image,” “Steel Butterfly,” “People Power: The Oral History,” “The Aquinos of Tarlac,” “Inside The Palace, The Rise and Fall of Ferdinand and Imelda Marcos” plus Ramona Diaz’s documentary on Imelda (“Imelda”).

I visited the Philippines over the Christmas holidays several years ago and talked with some filmmakers, journalists and other people about my project. I visited Ilocos and Tacloban, as I wanted to catch the flavor of the places where Ferdinand and Imelda came from. 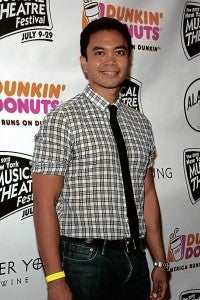 More recently, I had conversations with people involved in Philippine politics, including friends of Ninoy Aquino from when he lived in the United States. It seems everyone, everyone has a story! Some stories, of course, are horrific and tragic and others are surreal and funny.

How did you learn about Estrella Cumpas, the woman who raised Imelda?

Estrella was mentioned in a couple of the Imelda biographies. I tried to locate her, but did not succeed.

What does Melody Butiu, who plays Estrella, bring to the role?

Melody has been involved in this project for a long time! We met in late 2005 when I was hoping to kick-start the project by playing a number of international arts festivals. That didn’t happen, but here we are, working together again! I’m glad I had other projects, like record albums and tours to keep me busy, as these theatrical projects evolve slowly.

Melody is what they call a triple threat in musical theater—singer, dancer, actor. She gets the nuances of the character. I asked that (in her portrayal) she be thrilled and supportive of the success of her former ward, but also show a hint of disappointment that builds to anger and disillusionment.

How different is the musical now from the first idea that you had about it?

The big concept is the same—the story is told via songs, staging and video, not dialogue. In that respect, it’s like a concert that tells a story. The idea that it takes place in a dance club atmosphere is still there, too—the audience is in the middle of the room, as they would be in a club, and the action takes place on raised stages and platforms all around them.

The emphasis in the story has evolved, though. Ninoy Aquino has a much larger role, as does the People Power Revolution. There are about seven new songs that were not in the version I released on record—some of the new songs come from Ninoy’s speeches and some from oral testimony post-EDSA.

What were your sources of inspiration for the songs, especially Imelda’s numbers and her duets with Ferdinand? 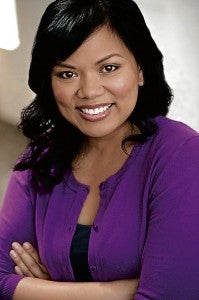 Most of the inspiration came from quotes, speeches, interviews and similar material—I would reorganize that material to rhyme and be sung and it worked! Occasionally, I would have to invent some material, but there is so much to draw from that I didn’t have to do that very often. The last song, “God Draws Straight (But With Crooked Lines),” is almost all made from quotations by people who were there during the People Power days. Incredibly moving stuff.

How did you choose Charmaine Clamor to be among the singers for that concept album?

I cast the singers on the album according to the style and mood of the song and what attitude the character has to project at that moment. I heard some beautiful recordings Charmaine had done and thought she’d be perfect. She nailed that song.

What qualities did you see in Ruthie Ann Miles and Jose Llana that clinched them the roles of Imelda and Ferdinand?

Both are incredible singers and actors who can adjust performances of a song to convey a wide and complex range of emotions. It’s been eye-opening for me to see what story-telling information a great actor can bring to singing a song simply by phrasing, a look or a gesture. Jose’s parents were very much on the other side during the Marcos era so for him the project is in some ways personal.

You got to “preview” some of the show’s songs with Ruthie, Jose, Renee Albulario and Joshua Dela Cruz at the Pace Gallery. What was that like?

It was an event that mixed some art world types and theater people. They don’t always mix here in New York, so it was enjoyable for both sides. We all had fun singing a few songs but the real purpose of the event was to encourage folks to financially support this production at the Public Theater, which is a nonprofit organization.

On a different note, Amy Besa and Romy Dorotan told me how delighted they would be whenever you dropped by their restaurant, Cendrillon (they have since opened a new place, Purple Yam, in Brooklyn). What Filipino food items do you like?

Wow—I heard about their new place! I need to get over there and try some of the dishes. Two new Filipino places have opened in the East Village recently, too. I sometimes cook adobo for my daughter—it’s one of her favorite dishes. I make ginger tea for the cast when I have time. I should make some now—it’s good for their throats.