Man behind sexy voice gets grumpy 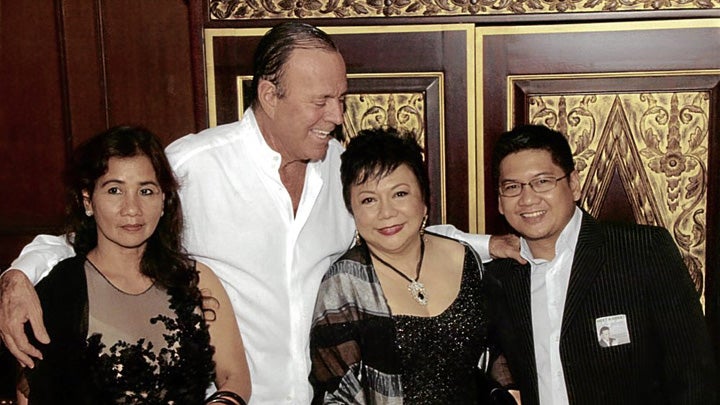 Who says sex appeal is wasted on the young? Don’t look at Julio Iglesias like there are no more fireworks left in a 69-year-old. On April 1, he was in Beijing to receive his Guinness world record for being the best-selling male Latin artist. If there were awards for melting women’s hearts around the world for nearly five decades, he’d have bagged one, too.

During a dinner-concert at the Manila Hotel Tent on April 6 that kicked off the Asian leg of his World Tour 2013, Julio still oozed virility—hair combed back and pomaded in place; body clad in a dapper dark suit. He closed his eyes as he sang and held the mic delicately, like a glass of expensive wine. His other hand made gentle gestures, as if caressing the lyrics.

His voice hadn’t changed, and with the aid of technology, it even seemed to have acquired a dreamier quality. The last notes and words of every verse sounded as though they were trickling into the collective hypothalamus of a hypnotized audience.

Which might explain why, through Julio’s first 10 songs, the audience just sat in silence, prompting him to jest, “I like the atmosphere here; it’s like being in church.” That maybe because Julio picked Spanish songs that the audience did not recognize. Between numbers, he spoke, in heavily accented English, of how he “loved these beautiful islands, especially the sex appeal of Filipina women.” Well, we know that one Filipina did fall for this compliment in the 1970s, married Julio and gave him three children.

He cited the “amazing talent of Filipina singers Sharon Cuneta and Lea Salonga,” but failed to mention Pilita Corrales, “Asia’s Queen of Song,” who opened the show with a medley of Shirley Bassey hits.

The well-heeled crowd livened up a bit when a pair of foreign ballroom dancers did the tango, which Julio described as the “vertical [version] of what we do horizontally.” The saxophonist, whom Julio introduced as Mike Scaglione, performed as seductively as the dancers. Julio joked, “You play so beautifully, maybe that’s why you’re the most expensive player in my group.”

The male members of the audience, many of whom escorted wives to see Julio perform, had their fill of three female back-up vocalists who could pass for Brazilian models.

Julio’s first-half lineup consisted of: “Amor Amor,” “La Gota Fria,” “Natalie,” “Galicia,” “A Media Luz,” “Echame a Mi La Culpa,” “My Sweet Lord,” “Mammy Blue,” “Me Siento De Aqui,” “Carusso,” “Ne Me Quites Pas,” and “Cumparsita.” More familiar tunes came in the second half—Patsy Cline’s “Crazy,” the Everly Brothers’ “Let It Be Me,” George Michael’s “Careless Whisper,” Brenda Lee’s “Always On My Mind,” and his signature hits “Hey,” the Albert Hammond original “To All the Girls I’ve Loved Before,” and his finale, the Spanish version of “My Way” of Frank Sinatra, who Julio fondly recalled as a close acquaintance.

Quite noticeable, however, were not a few empty tables at the venue. Show producers Beth Tagle and Alice dela Cruz said this was a direct result of Julio being “uncooperative” for all the four days he was in Manila before the concert, which aimed to raise funds for Joy of Living Foundation. “Only 70 out of 200 tables were sold,” Tagle said in a phone interview with Inquirer. The singer refused requests for media interviews, they said, prompting insiders to wonder if Julio, earlier described in a news report from Beijing as an “aging crooner,” could still handle a grueling itinerary.