Marian Rivera ready for steamy scenes on the big screen 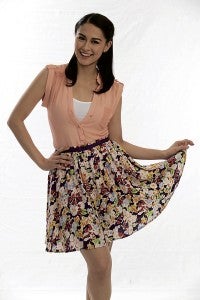 For the first time, actress Marian Rivera has agreed to do steamy bed scenes on the big screen.

Describing her love scenes on her coming movie “My Lady Boss,” Marian explained: “It wasn’t difficult for me because I had full trust in my leading man Richard (Gutierrez).”

Marian and Richard first worked together in the romantic comedy “My Best Friend’s Girlfriend” in 2008. “He never took advantage of me in any of our scenes. He treated me with respect.”

Marian shared what transpired while she and Richard were shooting their kissing scene. “Direk Jade (Castro) wanted the scene to be light and cute. Chard and I did some brainstorming so we knew exactly what to do when the camera started rolling. As my character, Evelyn, I just really enjoyed the kiss.”

The actress said it also helped that she cohosted the reality show “Extra Challenge” with Richard. “We became much closer. I feel comfortable with him,” Marian said. “Richard was never conceited, even though he started acting on TV and in the movies way ahead of me.”

In “My Lady Boss,” produced by GMA Films, Marian plays Evelyn, the “boss from hell” of Richard, who portrays Zach.

“It’s my first time to play a mean but ultraconservative character. She will eventually soften up to Richard, fall in love with him, and then go wild in her desire for him,” Marian said.

Marian was reacting to Heart’s earlier comment that she was ready to work with Marian once again. The two had a highly publicized falling out during the filming of their movie “Temptation Island” in June 2011.

Marian said: “Past is past. I don’t want the issue to get blown out of proportion once again. It does me no good to talk about it. Ako na naman ang masama. Let’s just say na ang damit, kapag nabutasan kahit maganda ang pagkakatahi may marka pa rin (I’m the bad one again. A dress, no matter how well the damage is stitched up, the tear could still be seen). But this doesn’t mean I’m not open to being friends with her again.”

Marian reported that her newest “textmate” is Batangas Gov. Vilma Santos. She met Ate Vi on the set of the Jeffrey Jeturian drama “Ekstra,” an entry to the 2013 Cinemalaya Philippine Independent Film Festival in July.

“I couldn’t believe I’d be given the chance to work with her. I only got to work on the film for three days, but it was a worthwhile experience,” Marian recalled.

During the March 19 media gathering for “My Lady Boss,” Marian belied the rumor that she and actor Dingdong Dantes were already living under one roof. Although she added that she saw nothing wrong with her longtime boyfriend paying her a visit at her house “because we’re already of age, not 12 years old anymore.”

She added: “I also visit Dong at his house, but this happens very seldom because I’m so busy with work.”