Welcome to Abra’s private world or, in urban parlance, his “crib.”

Who would have guessed that this well-appointed home in a sleepy subdivision somewhere in Pasig nurtured an award-winning rapper-musician and YouTube sensation?

Abra masterminded the year’s biggest hit, “Gayuma,” and its music video that has scored 20 million hits on YouTube, plus a slew of industry awards.

But who is Abra?

Abra—Raymond Abracosa in real life—is the first to admit that his background is not typical hip-hop lore.

Much like Gloc-9, a nursing graduate, Abra came out of left field. 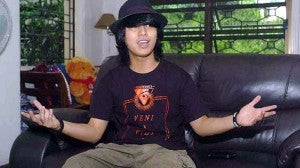 HE HAD a normal, happy childhood, he insists. Photo by Rodel Rotoni

He earned his high school diploma from Colegio de San Agustin and graduated with a degree in Management from the University of Asia and the Pacific in Ortigas Center.

Not exactly the raw and gritty stuff rappers are made of, Abra specifically seeks to jump out of the box. And break stereotypes.

To start with, there’s his rather sedate “crib.”

HE HAS given away several baseball caps from his sponsor Wip. Photo by Rodel Rotoni

On his days off from gigs, he will not be cooped up in his room (painted in a soothing shade of blue).

“I’d rather go out,” he quips. “Gumimik. Eat out. Watch movies. Good thing we live near a mall.”

But if there’s a deadline looming, he can be quite disciplined, too.

“GAYUMA” DVD as it appears in the music video. Photo by Rodel Rotoni

“If I need to finish a song, I prefer to work in my room so I can concentrate,” he says.

His bedroom isn’t necessarily where he is most creative. “When I’m not sure what to write, I go out and look for ideas everywhere,” he says. “When I wrote ‘Gayuma,’ I didn’t stay in my room. [That] is a mixture of several personal experiences.”

Lest anyone get the wrong notion, he points out: “It’s not that I courted a trannie or fell victim to a gayuma (love potion). My idea was to make gayuma a metaphor for deception [to show] that love is blind, love is shallow.”

He recounts: “I looked back on my friends’ stories, on the movies I had seen, the things I read in newspapers, all the stored information I had on the topic. But I didn’t want to write a love song. So I came up with a pseudo-love song,”

He clarifies that “Gayuma” can mean different things to different people, “depending on your interpretation. It’s universal. I guess that’s the reason people liked it. Everyone has his own ‘Gayuma’ experience.”

The flip side of success is controversy, however. Some people found the video “homophobic,” he confesses. “I am not dissing gays,” he says emphatically.

He elaborates: “Gayuma” aims to raise pointed questions and provoke meaningful dialogue. “That’s what I want in a video. After watching it, you should be moved to watch it again because you want to understand it more.”

And that was spoken like a savvy marketing man. Obviously, he’s putting his Management degree to fine use in the music biz.

HIS first batch of ballers was sold out. Photo by Rodel Rotoni

After a year of waiting, he noticed that hip-hop artists Gloc-9, Ron Henley and Loonie were among the front-runners in the charts, accumulating over a million hits on YouTube. It was a basic economic principle: There was a demand, and he was ready to supply.

He explains: “That’s what I want to share with other aspiring artists. Diskarte (Strategy). Of course, having a top-notch song is important, but you also have to have a good marketing plan, in order to sustain your art.”

He signed up with YouTube early last year, under PinoyTuner, which gave him his own channel: aabraatv. He gets a certain amount per view. 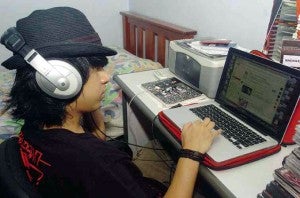 HE SURFS the Net in his room. Photo by Rodel Rotoni

He will top-bill a concert at the Big Dome, entitled “Araneta Dreams,” on Tuesday, April 9, along with music greats Freddie Aguilar, Gloc-9, Loonie, Greyhoundz, Ron Henley, Q-York, among others.

“We just finished the storyboard for my next video, ‘Ilusyon.’ That’ll be something different, too. Socio-political commentary.”

As a rap artist, he has a simple goal: “To be a game changer.”

There’s no one in the family with a music background, Abra volunteers. “I’m the first to join the music industry. And it’s a different kind of genre pa: Rap. Hip-hop.”

The middle child in a brood of three, Abra insists that his childhood was pretty uneventful—no scarring traumas comparable to Eminem’s or Kanye West’s.

“I was a happy child,” he says. “I was into normal stuff. Gimik. Hanging out with friends. I was into traveling.” 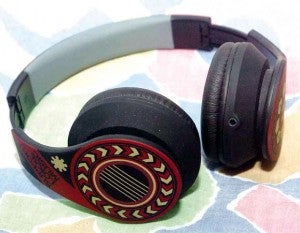 TIMBRE headphones used in the video. Photo by Rodel Rotoni

Scattered all over the living room are family photos of trips taken in Hong Kong and the United States.

His parents also enrolled him in painting classes at one point. “My introduction to art,” he says.

He was constantly exposed to movies and books as well. A landmark film in his growing-up years was Eminem’s “8 Mile”—his introduction to rap.

“I was a movie addict. I would watch three films a week,” he says. “My favorites were ‘The Lord of the Rings’ and ‘Star Wars.’ I also liked the comedy flicks of Adam Sandler and Jim Carrey. I saw (Sacha Baron Cohen) ‘The Dictator.’” 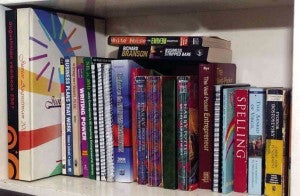 THE SERENE home is decorated with souvenirs and framed photos from family trips. Photo by Rodel Rotoni

“I am not ashamed to admit that I read four ‘Harry Potter’ books when I was young,” he remarks.

Books, he says, spark his creativity. “The books I read in school, ‘To Kill a Mockingbird’ and Dante’s ‘Inferno,’ were a big help, too.’

He’s a self-avowed “knowledge” junkie. “When I was a kid, I loved reading the encyclopedia. I’ve retained my love for facts and trivia. And until now, I always watch National Geographic, Discovery and the History Channel.”

As a kid, he was also into RPG (role-playing games). “I played video games like Final Fantasy, Chrono Cross and Legend of Legaia,” he says.

He confesses, however, that he was a naughty kid, too.

Even though he grew up in a rather affluent milieu, which he described as “sosyal (posh) and English-speaking,” his individuality (and love for hip-hop) was embraced and encouraged by his peers. 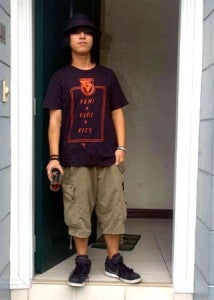 ABRA signed up with YouTube last year— now he has his own channel and gets a certain amount per view. Photo by Rodel Rotoni

“My barkada and I joined the hip-hop scene. That was LDP: Lyrically Deranged Poets,” he reminisces.

It was a double struggle. He had to fit in in two disparate worlds: The high-class turf of his classmates and the thrilling underground hip-hop scene.

“People used to look down on hip-hop as jologs (low-class) and baduy (tacky). But the perception is slowly changing,” he notes.

Overcoming class bias is a common rite of passage for many young Filipinos. Abra advises other teens to simply be themselves.

He says it’s wiser to “come up with your own look … no one can fault you for not being trendy because you don’t follow trends.”

He defines the “Abra” look as unique but low-key. “I can blend in, but you can still notice that I’m into hip-hop.”

He shuns bling, however, and all the usual accoutrements of the hip-hop world.

“I’m not a collector. I’m content to have just one new pair of shoes in a year,” he says.

He started accumulating headgear after local brand Wip Caps signed him up as endorser.

“Our first batch of ballers was sold out,” he says, proudly.

Abra shirts are now in the works. He looks up to the late rapper Francis Magalona, whose FrancisM Clothing Company has become an iconic label.