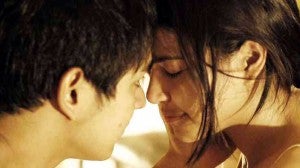 Although observers may cry injustice because she won her first best actress trophy abroad just recently, Alessandra de Rossi seemed unaffected. “It was simply the right time,” she told the Philippine Daily Inquirer.

“Since then, every time I’m nominated, I don’t expect to win,” she said. “Local awards were elusive. I forgot it was possible to win abroad. This was a big surprise.”

De Rossi recalled: “I used to joke with Direk Manny (Palo’s nickname): If I don’t win for this, I’ll quit show biz.”

Which leads us to an intriguing statement she once made. Exasperated with being typecast as a contravida in local soaps, she vowed to retire altogether and join feminist group Gabriela. She was tired of scheming, sinning and slapping other stars on the set, she said.

In her inimitable way, she backtracked, in jest: “But I still have three years to go on my home [amortization].”

Seriously now, she clarified: “I didn’t want to bring that up… I don’t want to sound ungrateful. I have no issue against the networks or the producers who never tire of giving me jobs. I’m very lucky as it is, compared to other actors who would kill to land roles.”

De Rossi said being boxed in as villainess was a “personal crisis” for her. “I’d rather not add any more to the negativity in the world. There’s too much violence, hatred and bitterness as it is. I just want to inspire viewers with my projects.”

Thank heavens for indie films like “Santa Niña,” she said, which give her not only international acclaim but also the chance to inhabit characters that are out of the box.

She just wrapped up work on Gil M. Portes’ “The Liars,” an entry in the Cinemalaya Directors’ Showcase section this year. “It’s our reunion film,” she said of Portes, who directed the 2002 drama “Mga Munting Tinig,” for which she got a best actress nod in the Urian (critics) Awards.

They had a running gag on the set, she said. “Direk Gil would remind me that I’m up against Vilma Santos (in Jeffrey Jeturian’s ‘Ekstra’). I would ask him: Should I give my all? Direk Gil would reply: “Itawid mo na lang. (Just get it over with.)”

De Rossi noted: “That’s because the year I had ‘Munting Tinig,’ Ate Vi had ‘Dekada ’70’ in the awards derby.”

The award is sweet vindication, in light of the naysayers who called her a has-been just because she went on vacation and became choosy with projects. “I learned a lot  while I was away,” she pointed out. “I studied painting and furniture-making. I discovered things some people would take three lifetimes to master.”

She playfully described her music as “heavy and confusing, very artistic.”

Alix recounted: “We discussed what I wanted… and I liked the samples she submitted. I’m familiar with her songs and I know her influences. I was confident her sound would fit my vision for the film.”

However, she was quick to share credit. “I couldn’t have done it without my bandmates Chris Valera, Pat Tirano and Veronica Deposoy, who are also the coproducers of my album (‘Adrift’).”

Obviously, the actress’ other passion is music.