Refreshing music pours forth from Jars of Clay | Inquirer Entertainment

Refreshing music pours forth from Jars of Clay 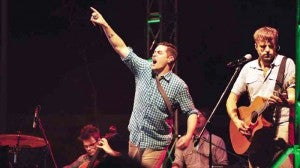 Late July last year, the official Jars of Clay website jarsofclay.com announced: “On July 25th, our singer Dan Haseltine underwent a procedure to correct a coronary issue after experiencing a cardiac event. He is doing well and recovering. Dan is grateful for the thoughts and prayers that have gone out on his behalf.”

Haseltine’s surgery caused the Christian rock band from Nashville, Tennessee, to miss what it considered its “favorite summer festival,” Soulfest in New Hampshire.

That was just over eight months ago. The man with the voice behind such inspirational hits as “Flood,” “Five Candles (You Were There),” “Show You Love,” and “Tea and Sympathy” has fully recovered. In a recent tweet to fans, Haseltine credited “a heart-healthy diet which I think includes low sodium, low fat and low politics in general.”

Easter night, March 31, at the Bonifacio Global City High Street Walkway in Taguig City, Haseltine was in fighting form. He and his heart were where they wanted to be—onstage, pouring out words and music that Christians, and music lovers in general, would stop for and lend an ear to. When he sang “We Will Follow,” the lines “In the shadow of the cross where my first love died/ In the valley where we learn how to climb so high/ Will You open my heart and reach inside/ Till the blood on Your hands is Yours not mine?” Haseltine’s face contorts in such a manner that he may have truly felt the words spiritually and physically. 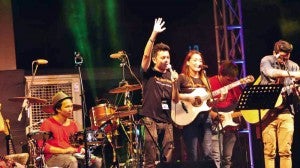 But Haseltine channeling pain onstage was quite rare that night. The Haseltine that the High Street crowd saw on the day Christ rose from the dead was a cheerful frontman who started the show jumping and using the entire stage to proclaim the message of “Two Hands”: “And it feels like giving in/ It feels like starting over/ It feels like waking up, and you know it’s coming/ It feels like a brand-new day/ Open your eyes.”

The 3,000 or so fans converged on the open grounds had a full view of the musicians who had held together Jars of Clay through 18 years and 11 albums: Haseltine, Charlie Lowell on the piano, Stephen Mason on lead guitar, and Matthew Odmark on acoustic and rhythm guitar. They were joined by cellist Matt Nelson who, later in the show, playfully produced whale sounds on his instrument, to which Haseltine responded, “Yes, whales need saving, too.”

Haseltine’s no-fuss, no-frills singing, when combined with the blending vocals of the other band members, results in a texture not unlike that of folk rock band America: Raw yet precise, like the pedestrian lines of a walkway commanding the reckless and the harried of the fast lane to stop, look, listen.

The interactive Walkway exhibit on High Street featuring 14 stations depicting the death and resurrection of Jesus Christ, might have had its 15th station right where Haseltine and his faithful crew harmonized their plea to the heavens in “Flood”: “Lift me up! Keep me from drowning again.”