A swig with The Script | Inquirer Entertainment
Close
menu
search

A swig with The Script 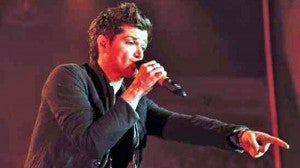 Midway through Irish band The Script’s concert on Sunday, guitarist Mark Sheehan quipped that one should think twice before bringing an Irishman to an open bar. “He’ll finish the whole thing,” he told the thousands of thrilled fans who filled The Big Dome to the rafters.

As if to prove Sheehan’s point, the alternative rock band’s tall, lanky and charismatic vocalist Danny O’Donoghue hoisted a bottle of beer, and, to much cheering and screaming from the crowd, emptied it with a single swig. Fittingly, he followed the antic with “Nothing”—a forceful song about a man, who, after getting himself drunk, starts calling his ex-girlfriend to confess that he is still in love with her.

Sheehan then cheekily urged the crowd to “do something inappropriate” by dialing ex-lovers’ numbers. O’Donoghue approached one of the girls near the stage, asked for her mobile phone (she gamely obliged), held it to his ear and, tenderly, began singing the song’s first verse to the person on the other end of the line.

A girl near us, panting between shrieks, unwittingly summed up the spectators’ collective sentiment at that point: “Oh my God!”

As with “Nothing,” relationship problems and a brokenhearted man trying to win his woman back are themes that The Script treads every so often. Their songs deftly mask sentimentality and melancholia with rousing, uplifting and, at times, upbeat melodies. For about two hours, we were treated to just that, and then some.

The gig started almost an hour later than the scheduled  8 p.m., and the excitement at The Big Dome was palpable. Sensing the crowd’s eagerness, O’Donoghue wasted no time hopping off the stage and mingling with his fans as he opened with the anthemic “Good Ol’ Days,” lead-off track from the band’s latest album, “#3.”

Before soldiering to his next song, “We Cry,” O’Donoghue turned his back to the audience, struck a messianic pose with arms outstretched, and basked in the adulation. It didn’t take a lot to have everyone going: A flick of a finger, a wave of an arm or a fist raised in the air was all it took to make the girls swoon.

A feverish guitar player, Sheehan is no slouch, either. After all, the two are ex-members of Mytown, a late ’90s boy band (cheesy dance steps and all), that didn’t quite take off.

Arguably the band’s ultimate breakup song, “Breakeven” elicited a deafening sing-along. So did  “Science and Faith,” prefaced by a swelling passage of percussion from drummer Glen Power. After chatting with the crowd, O’Donoghue began “The Man Who Can’t Be Moved”—the band’s 2008 breakout hit—a cappella, and finished it off with a mellow arrangement.

As they performed “Before the Worst,” “For the First Time” and “If You Could See Me Now”—hits culled from their three studio albums, “The Script” (2008), “Science and Faith” (2010) and “#3” (2012)—it was clear why the band became this big. Though hardly groundbreaking, its music works its way into the listeners’ hearts and minds with brisk, semi-rapped verses and radio-friendly choruses packaged in pop-rock, piano-driven sounds with streaks of R&B.

The lyrics are far from sweeping poetry, but very relatable, and could hit a forlorn lover like a speeding bus. From “Breakeven”: “When a heart breaks, no it don’t break even… What am I supposed to say when I’m all choked up and you’re OK?”

The words can be corny, too, as those in the overtly saccharine “I’m Yours,” which the front-man performed bare-bones: “You wrap your thoughts in works of art / And they’re hanging on the walls of my heart.” But O’Donoghue’s vocals are earnest and his delivery affecting, flourished by a nice falsetto here, a tender vocal run there … that it’s easy to forgive him.

After performing 12 songs, The Script exited the stage prompting the crowd to chant: “We want more!” O’Donoghue reappeared in the lower box section for an encore. He sang “You Won’t Feel a Thing” while wading through the hordes desperate for photo-ops.

Finally back onstage, O’Donoghue championed self-empowerment with “Hall of Fame,” which ended with a burst of confetti and a crescendo of rumbling drums. The three-man band, together with two touring musicians, held and raised their hands, and bid everyone goodbye.

Yet again (as one of their songs goes), the crowd was not movin’. And with a little cheering and coaxing, the band gave in once more and found themselves ending the night the way they started it, singing “Good Ol’ Days.”

An encore after an encore?  It was a first for The Script as far as touring goes, and it took a zealous Easter Sunday crowd for them to do it. On their Twitter account, they posted:

“Tonight was the first time we ever went back on and did another encore after the encore!! Ever!! Thanks for a great show everyone!!!”