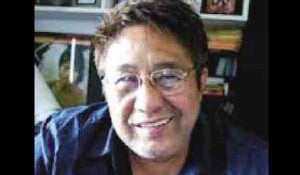 TV and film director Maryo J. de los Reyes sees the latest Film Development Council of the Philippines (FDCP) project that provides seed funds for veteran filmmakers as a “fitting tribute to those who helped carve the history of Philippine movies.”

They will get grants from the FDCP Film Investment Program to help them realize their dream movies, ideally to be set in their respective hometowns.

“The newbies get to shine in festivals like Cinemalaya and Cinema One. It’s good that FDCP is focusing on us. We’re still very much part of the industry,” De los Reyes told the Inquirer. “It’s also good that it is happening now. We’ve lost three great artists.”

De los Reyes was referring to Mario O’Hara, Marilou Diaz-Abaya and Celso Ad Castillo, who all passed away in 2012. “They would have been among the 12 featured filmmakers. We don’t make a lot of movies [any more]; to finish one is a big deal for us.”

For De los Reyes, the FDCP grantees were “all good and deserving. Every one of these directors has an impressive body of work. Most of their films can be considered classics.”

His project, “The Bamboo Flower,” will feature Max Collins, Neil Ryan Sese, Diva Montelava, Orlando Sol and Mylene Dizon. He also hopes to get Sef Cadayona, as well as “Protege” finalists Ruru Madrid and Miguel Tan Felix, on board.

The movie, to be shot mostly along the Loboc River in Bohol, will be about the resilient bamboo plant. “Its flowers are so beautiful, they look like parts of a chandelier. But beautiful as they may appear, their presence is a sign that the plant is dying.”

De los Reyes was pleased with the program’s performance, ratings-wise. “We were told beforehand that it would not be extended, which was OK with me. The story was a little heavy and serious. It discussed drugs, adultery and other adult subjects,” he said.

The director was impressed with De Leon. He said the actor had become a very mature and intense performer. “He really prepared for every scene; I could see that he used new techniques in tackling the role.”

De los Reyes said Tolentino, on the other hand, was a “more inquisitive and analytical” actress now. “It’s obvious she respects her craft, unlike most young actors nowadays.”

Collins reminded the filmmaker of a young Gloria Romero. “Max has great potential,” De los Reyes said. “She was never afraid to face off with the more experienced actors.” He described Dingdong as “a good actor” but advised him not to spread himself too thin. “He wears too many hats—TV star, civic worker, promoter, endorser, producer… He may burn himself out.”