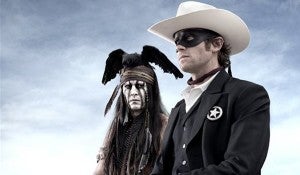 This undated publicity photo from Disney/Bruckheimer Films, shows actors, Johnny Depp, left, as Tonto and Armie Hammer as The Lone Ranger, from the movie, “The Lone Ranger.” (AP Photo)

LOS ANGELES— Johnny Depp is coming to Las Vegas to talk to fans about “The Lone Ranger.”

Disney announced Thursday that Depp and co-star Armie Hammer will discuss the anticipated adventure film on April 17 after showing 20 minutes of exclusive footage to about 400 local fans at a neighborhood theater.

Director Gore Verbinski and producer Jerry Bruckheimer will also participate in the question-and-answer session, which is set to stream live online on Yahoo! Movies and Livestream.