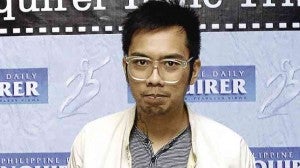 Filipino filmmaker Raya Martin will work with Oscar-nominated Filipino-American director of photography Matthew Libatique on the new film, “The Empire.”

“We are very excited to finally work with him,” said Raya of Libatique, who is best known for shooting the Hollywood movies “Black Swan” and “Iron Man.”

Martin plans to begin “The Empire” shoot in Mexico in 2015. Developed during Martin’s Berlin Residency in 2012, the film will feature a cast of Filipino, Mexican and Spanish actors. In the meantime, Martin is wrapping up work on the thriller “How to Disappear Completely,” which top-bills Nonie Buencamino, Shamaine Centenera-Buencamino and Ness Roque. “How to Disappear” is supported by the Hubert Bals Fund, a grant given by the Rotterdam fest. Bayani San Diego Jr.