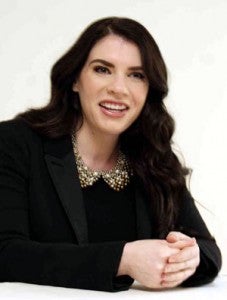 LOS ANGELES—A recent interview with author Stephenie Meyer gave us the chance to ask her to recap her “Twilight” journey, several months since the last in the franchise, “The Twilight Saga: Breaking Dawn-Part 2,” was released.

“Surreal, humbling and fantastic,” was how Stephenie summed up her ride, which began when she wrote the first novel, “Twilight,” in 2005.

“You would not believe how intimidating it is to sit and talk with someone while a camera is going off,” the author told us, laughing, in a meeting room at the Four Seasons Hotel. But she appeared calm and poised—a brunette woman wearing a dark blue blouse and blazer over jeans. She was articulate, her answers concise. Not unexpected from a writer, she’s able to process her comments and anecdotes in an interesting, organized fashion. She maintained, “I’m a naturally shy person. I’ve had to get over that a little bit.”

For starters, we asked Stephenie her standout memories of the “Twilight” cast. “One of the first is when I first visited the set and I went out to dinner,” she began. “I hadn’t met anyone in the cast. They were coming from dinner and they were delayed. They came straight from a gallery shoot where they were all in character costume, make-up… the whole bit. So the first time I met them, they were dressed up like my imaginary friends. That’s not something you get every day.”

She added: “Watching some of the early scenes we filmed… you get to see something taken out of your mind. When it gets close to how you pictured it… that feels like someone’s been inside your head and now they’re acting out your fantasy. It’s surreal and wonderful in a lot of ways.”

Stephenie again laughed heartily as she recalled her unforgettable first meeting with Robert Pattinson. “When Rob and I first met, we had lunch together [and] talked about the script. We sat there and ar

gued for a solid hour and a half about the Edward character. And he was really sure I was wrong [in parts]. I was telling him, ‘This is how Edward feels…’ He said, ‘No, this is how he feels here.’ We went back and forth [that way]. It was hilarious and fun.”

She continued: “With Kristen (Stewart), it’s hard to pick [a best memory]. The one I think of first is filming the wedding scene. It took a really long time and it was freezing cold. A lot of the time, we were holed up in the garage of a house that we weren’t shooting in so we had all the gear there. Kristen was in her wedding dress—this really beautiful, satin gown that fitted her perfectly. She was very tired.”

The actress was “just so funny,” the 39-year-old novelist said. “It was near the very end and she was just realizing that this was it, this was the wedding. It was just fun, kind of relaxing in those circumstances. That is memorable for me.”

Stephenie is embarking on a new adventure with her novel, “The Host,” adapted as a romantic sci-fi adventure film that stars Saoirse Ronan, Max Irons, Diana Kruger, Jake Abel and William Hurt. Andrew Niccol is directing. No vampires in this one, only aliens who take over human bodies and the Earth.

Given “Twilight’s” success, Stephenie was asked if she felt the pressure to produce more hit novels and movies. “The pressure is there,” she conceded. “But I never feel like I have to. I am now working on a sequel to ‘The Host’— something that I have partially done for a really long time.”
She stressed, “I don’t sit around. When ‘Twilight’ ended, I thought I was going to feel sad but I didn’t. To me that means, okay, then I’m satisfied with that world and I don’t need to be there right now.”

(However, at the end of our chat, when I asked if she could definitely say that she’s done with the “Twilight” series, Stephenie answered, laughing yet again, “Never say never.”)

She knows there’s pressure, from doing book signings, said the mother of three sons (Gabe, Seth and Eli) who lives with her husband, Christian Meyer, in Arizona. “The kids come through and say, ‘I want this specific thing and that specific thing.’ The problem is, everybody wants something slightly different from you. So if you let that determine what you’re going to write next, you’ll never be able to settle on a project. I can only write what I am interested in, what makes me excited, the story that’s in my head. I let the outside stuff go away when I’m writing. Otherwise, I’ll never get anything done.”

Asked what was the biggest challenge for her before “Twilight” broke out, Stephenie had a quick answer: “Immediately before ‘Twilight’—just complete lack of sleep. Sleep deprivation was killing me before ‘Twilight’ because I had these kids who never slept. Now that they’re grown up, it’s fantastic.  ‘Twilight’ was kind of a mental place to go where there was adult conversation, excitement. It was away from the everyday grind of diapers, vomit on the floor and all that good stuff.”
How did she find time to write? “I stole time from sleep,” Stephenie said with a smile. “I did a lot of writing at night. And I wrote with my kids around me. I would have Eli—he was my little baby—in my arm with the bottle, under my chin. I’d type with the other hand. Seth would be hanging onto my leg and watching ‘Blue’s Clues’ behind me. You multitask when you’re a mom.”

That vivid scene took place in the kitchen but these days, she writes in an office room in her house. Like most writers, Stephenie prefers to write in the evening. “I write best at night, which is one of the reasons that I’m so slow now,” she said. “My kids’ school schedule has forced me to be a morning person, which I am not. I don’t get so much done during the day. There are too many interruptions. It’s better if I can start at 8 p.m. and work through till I pass out.” Laughing, she quipped, “Maybe, I should move back into the kitchen.”

She cited another development in her life. “Now, the biggest challenge is not being able to be home as much as I like,” she said. “I’m really missing my bed and my home.”

How Stephenie wrote the first “Twilight” novel, which led to a total of four books that sold a staggering 116 million plus copies worldwide, is a story that many aspiring novelists wouldn’t mind hearing again and again. 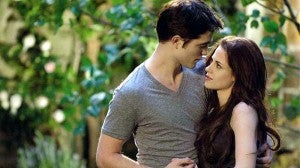 “When I first started writing, I was not thinking about marketing myself or even writing a book,” Stephenie said. “It didn’t occur to me that it was a book. Even when I was finished, I thought, wow, this story could be a book because it’s so long. That was how my thoughts went. I wouldn’t have done anything with it; my big sister was the only other person who knew what I was doing. She was reading along and she said, ‘You have to try and publish it.’”

The Connecticut native who grew up in Arizona continued, “So I looked up how to do that. You have to have an agent, which was so intimidating. I knew athletes had agents; I did not know that authors did. I wrote really awful one-page queries that were like, ‘Hi, my name is Stephenie Meyer. I’ve never written anything. Here’s a really bad summary of my book and let me know if you want to read it.’ They were awful.”

One person wanted to read a couple of chapters. It was the assistant of the person who would be her agent, pretending to be the agent. “That was awesome. I owe her. She asked for it and I sent it off. She wanted more. Then my agent called. They did all the marketing. I just got extremely lucky. The right people got excited. I didn’t work as hard as I think a lot of people do to get published. Mine is the Cinderella story.”

She wrote that first novel in three months. “I was obsessive,” she said.

“I didn’t write when I was little but I did read,” she recalled. “I was a part of a really big family. You all take different roles. I was the bookworm. I had an armchair that was my favorite. I would slump crosswise on it. That’s where they would always find me with a book. I read my mom and dad’s books mostly. I couldn’t get to the library every day. I was a very fast reader. When I was really young, it was ‘Gone With the Wind’ mixed with ‘Little Women’ and then there would be some Zane Grey because my dad had a bunch of those. I read anything I could get my hands on.”

We were curious if, like some writers, she had the same habit of waking up at night when ideas hit them and jotting those down. “I usually keep a pen and a notebook by my bed,” she answered and then added, grinning, “My handwriting is awful, though. At night, it’s really just a flip of the coin whether it’s going to make any sense to me in the morning or not. So sometimes I lose it. I hate that. I’ll wake up and write something down that I know is really good. Then in the morning, I can’t tell what I wrote. Oh, it’s the worst.”

Does she listen to music while she writes? “I do but, lately, I’ve been listening to scores. I’ve been collecting different scores that I like. I’m a huge Danny Elfman fan. For some reason, the score for ‘28 Weeks Later’ (by John Murphy) was really working for me at one point. “

The three sons’ preferred reading material is not by their mom. “My kids each have their own thing,” Stephenie pointed out. “My oldest loved the Percy Jackson series by Rick Riordan—that’s what got him into reading. You’re always grateful to the authors that your kids started reading. My middle son is a huge Harry Potter fan. He lives and breathes it. It’s his goal—and he’s completely serious about this, to be a wizard when he grows up. That is his career goal. My youngest finally found the books that really get him excited—the Artemis Fowl series.”

On Christian, she volunteered, “My husband is an accountant. He’s very much the complement to me being crazy and out of my mind all the time. He’s very numbers-oriented and structured. So that works out well. He is also good with computers so he can fix mine when I screw things up, which is great. He does commercial real estate now.”

Does she feel the need to match herself? “I don’t,” she replied quickly. “I feel really open about what I can do with my writing. I’m free to do what I want now which is really cool. Sometimes, I think about writing stuff that I wouldn’t publish, just to write again for myself.”