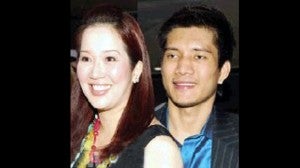 MANILA, Philippines – In an emotional interview on “TV Patrol” on Thursday night, beleaguered television host-actress Kris Aquino announced that she was quitting show biz and “giving up my shows” for the sake of her five-year-old son James Jr. or “Bimby,” who’s caught in the middle of a spat between his mom and dad James Yap.

But she’s not quitting anytime soon, it turned out.

In a statement sent to the Philippine Daily Inquirer by Bong R. Osorio, head of ABS-CBN Integrated Corporate Communications, he said that Kris would fulfill her commitments to her three shows, “Kris TV,” “Kailangan Ko’y Ikaw” and “Pilipinas Got Talent 4,” upon her return from her planned vacation with her sons, Bimby and Joshua, in France scheduled today, Saturday.

“She will have to stay as a judge in “PGT 4″ till its end in June. Being a foreign franchise, there are commitments we have to fulfill and rules we need to abide by,” Osorio said. The “Got Talent” franchise is produced by Freemantle Media.

Osorio added that Aquino would likewise finish her soap opera “Kailangan,” which is nearing its end. A network insider told the Inquirer yesterday (Friday) that the production staff behind the drama series might ask Aquino for two to three more taping days.

Meanwhile, Aquino and the ABS-CBN management are also scheduled for a meeting when she comes back to Manila.

“We wish Kris and her sons a peaceful and restful vacation. We respect her need for privacy at this difficult time,” Osorio said.