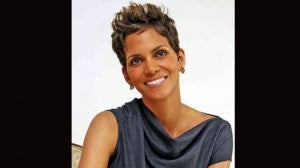 LOS ANGELES—Let’s get it out of the way: Halle Berry seems to look more stunning each time we interview her. “There’s no secret,” said Halle, gorgeous in a Helmut Lang dress, sporting her trademark short hair, her olive skin glowing.

“I’ve lived a healthy lifestyle,” explained the actress. “I got diagnosed with diabetes at 19. I just have a healthy diet, and I always exercise. As I’m getting older, that kind of attention to my health is paying off. I only work out three times a week, 30 minutes a pop.”

The former beauty queen and fashion model said she does her share to erase the stigma about diabetes. She pointed out, “I try to do my part as a role model, by openly talking about it, what I’ve gone through, how I handle it in my life…I hope I’m getting the message out there—that it’s nothing to be ashamed of.”

On how she seems to be always centered, Halle disclosed, “I’ve always done therapy on an as needed basis since I was 10 years old. My father was an alcoholic, and a very abusive one. My mother knew the value of providing me an outlet—an unbiased person to talk to, to help me manage my feelings and emotions. So, I’ve done that throughout my life. If I feel like I need to, I do meditation. I find that our mind is really powerful. What we think and what our thoughts are can really control our reality—how we look at things.”

In her new film, the Brad Anderson-directed thriller, “The Call,” Halle plays Jordan, a veteran 911 emergency call center operator who takes a call from a teenage girl, Casey (Abigail Breslin), who has just been abducted by a serial killer. Casey manages to make a crucial 911 call in the trunk of the killer’s car. Jordan takes charge of the stressful situation to save Casey’s life.

Halle was asked how she handles stress in real life. In 2011, she took her ex, Gabriel Aubry, to court for the custody of their daughter, Nahla. In November last year, Gabriel and Halle’s boyfriend, French actor Olivier Martinez, fought outside her home and were sent to the hospital for injuries. A few days later, Halle and Gabriel settled their custody fight in court.

“I’m always the person that handles it so well that most people don’t even think I’m having a problem,” Halle said. “I’ve learned how to mask it or deal with it internally and not wear it on my sleeve. I try really hard not to take it out on others.”

As to how 911 operators, like her character, Jordan, are hired and trained to keep calm in their stress-heavy jobs, Halle cited, “They go through an intense training program. Eighty percent don’t make it as 911 operators. The operators have to be completely sound and solid.”

What was the most important call she took in her life so far? “When my lawyer called me and told me that the guy who’d broken into my yard was going to be sentenced to prison,” she replied. “That felt really important, because I was worried that this guy would come back and come back.”

Halle was shaken by the stalker’s intrusion because she considers her house as her only sanctuary—“every part of my house, especially living in LA, where there are paparazzi. There’s nothing like going home.”

Displayed in her house is her collection of works by artists from Rimi Yang to Richard Childs. She’s saving to buy a sculpture by Colombia’s renowned artist, Fernando Botero.

While talking to her, we wondered why she isn’t offered roles that tap her humor, because her light, easygoing manner is in contrast to the serious characters she has been portraying in recent years. “Can you write about that, so that people can start to know that I’m not this serious,” she asked with her dazzling smile. “I did some of those things early in my career with films like ‘Strictly Business’ and ‘Boomerang.’ After ‘Monster’s Ball,’ I got labeled as the heavy, dramatic, tortured soul. After that, people found it hard to see me as a lighthearted, Jennifer Aniston type who could be the girl next door whom you could find so funny. That’s my challenge! I’m probably going to have to create it for myself. I’m working on producing a lighthearted comedy called ‘Mother.’”

In the meantime, Halle dons Storm’s leather jumpsuit again when she reports to the set of “X-Men: Days of Future Past” next month. “That’s a character I love to play, she pointed out. “People love the ‘X-Men’ series. People particularly love Storm, so I feel a lot of responsibility to try to portray her in a way that would make all the people happy. I’m excited to be back! It’s about the X-Men in the future.”

With her continuing success, the woman born in Cleveland, Ohio, commented on how she has changed over the years. “I can’t say that I’m exactly the same, because that would mean I haven’t been living my life and not being honest,” she explained. “Certain things have changed from that little girl, sure. My lifestyle has changed, the kinds of people that I get to know have changed.”

Halle added, “But, people who have known me say that I am still the same person I’ve always been. But, I have the knowledge of the life that I’ve had, so I can’t be exactly the same—or else, I wouldn’t have taken advantage of this amazing life that I’ve had. The fact that I still have some people whom I’ve known from 20 or 30 years ago has to say something—and I value that a lot!”

When will she finally act on her dream to live in Paris? “When my daughter is 18 years old and off to college, I can do exactly what I want,” she said. “At some point, I do believe that I will end up in Paris. That’s where I am going to end my days, that’s for sure.”