Return of the movie love teams 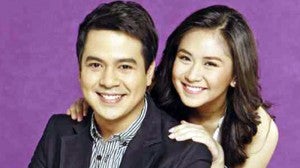 CRUZ AND GERONIMO. Reunite in “It Takes A Man and A Woman.”

Time was when love teams ruled over the local movie scene—Guy and Pip, Vi and Bot, Gabby and Sharon, Maricel and William, Snooky and Albert—you know the drill. For some years now, however, movie tandems have been eclipsed in popularity by the film production slump and the teleserye craze, or they’ve held sway mainly on TV.

So, it’s instructive to note that some sort of revival could be in the offing, starting with the recent Kathryn Bernardo-Daniel Padilla starrer, “Must Be…Love,” which clicked with young viewers earlier this month.

The rom-com’s good showing at the tills had encouraged the emergence or revival of other movie love teams, whose own showcase starrers are about to affirm their stellar players’ hold on viewers.

At the end of the month, the popular love team of John Lloyd Cruz and Sarah Geronimo costar once again in “It Takes A Man and A Woman.” This “third and last” outing is deemed to be a rite of passage of sorts for their rom-com pairing, because the “eternally cute” Sarah finally aims to turn in a more “adult” portrayal in it. Now that the popular actress-singer is chronologically “turning silver,” it really is about time for her to opt for a more adult characterization.

Trouble is, she can’t completely let go of her “signature” big-screen image, so finding the right mix of “then” and “now” could be cause for some concern.

As for John Lloyd, he has no problem playing it older and wiser, as evidenced by his “serious” TV-film roles. But, the success of his latest film can’t be claimed exclusively by his love team with Sarah, because he’s become the screen consort of choice of other popular female stars, like Bea Alonzo and Angelica Panganiban.

So, unlike other, more “exclusive” love teams, Sarah has to “share” John Lloyd with those leading ladies. —But, that’s still a better deal than not having a hit love team at all, especially since Sarah’s other pairing with Gerald Anderson has gone kaput.