MANILA, Philippines – “I hate you! I don’t want to talk to you! Stay away from me!” 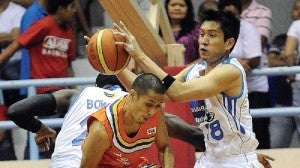 Chavez is representing Kris who recently filed for a temporary protection order (TPO) against Yap, saying he (Yap) had made “overt sexual advances” during one of his visitations last December but was rejected, after which he said “mean and malicious statements.”

Chavez said that the incident, one of several, was seen by Bimby and had traumatized him.

There were also such incidents that happened last January, on March 8 and also on March 13, Chavez said.

On March 8, Kris had found Bimby running and shouting “I hate you! I don’t want to talk to you! Stay away from me!” during one of Yap’s visits, Chavez said.

The following week, on March 13, Yap had wanted to talk to Bimby, there was a video taken by an assistant of Kris showing that Bimby did not want to talk to his father, Chavez added.

He further said that Yap was not sincere in seeing his son because out of the 104 times a year he was allowed to visit on a twice-a-week basis, Yap only visited 22 up to 25 times at most.

“He himself has indicated that he is not sincere in seeing his son,” Chavez said. “He does not avail [of his visitation rights], he does not maximize the opportunity.”

When asked why it was only now that Kris filed for the protection order when the alleged harassment incident happened in December, Chavez said they wanted to let the issue cool down first and had hoped Yap would change his ways.