As luck would’ve it, two of her films are showing in March, women’s month 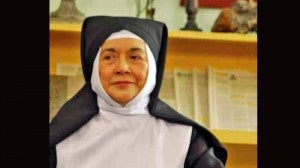 The irony wasn’t lost on her. Opera singer-turned-actress Fides Cuyugan-Asensio was the first to point out: “In ‘Oro, Plata, Mata,’ I was a rape victim. Now, 30 years later, in ‘Aparisyon,’ I am witness to a rape—not mine!”

Quite by chance, these two films had local theatrical releases this month, women’s month.

“I have not gotten over the fact,” Asensio told the Inquirer, “that this late in my life I get to play major roles in major films.”

She compared the “Aparisyon” shoot last year to time travel: “Every time I donned my nun’s habit in a real-life convent on the hills of Angono, I’d feel the 21st century recede into the past.” She said she modeled her character, Mother Superior Ruth de los Reyes, after someone she once knew.

“My father never trusted nuns with his daughters’ education,” she recounted. But after Manila was liberated from the Japanese, Asensio, then a junior in high school, found herself enrolled in Assumption College, which was supervised by nuns. “My father had no choice because my alma mater, Philippine Women’s University, was in ruins. Our classrooms (on the Assumption campus on Herran Street) were military-issued Quonset huts, courtesy of the US Army. That was 68 years ago.”

In Assumption, she met Madame Marthe, the French nun who served as the inspiration for her Mother Superior. “Assumption nuns were called ‘Madame’ and Madame Marthe was strict but sweet with a lot of compassion for teenagers,” she related.

Asensio insisted that she “thoroughly enjoyed” playing a nun. “No hairdo to fuss over. Very little makeup. No nail polish. No waistline to watch. But it was hot! Wearing a nun’s habit in the heat of summer was no fun in the Philippines!”

She was impressed by the “Aparisyon” ensemble—which included Jodi Sta. Maria, Mylene Dizon and Raquel Villavicencio.

“The shoot was harmonious,” she said. “There were no prima donnas, only singers with perfect pitch for their respective roles.”

She described director Sandoval as a soothing presence. “He was even-tempered, soft-spoken, unflappable. He never raised his voice.”

Still riding high on the “Aparisyon” experience (and on the “Niño” comeback in Cinemalaya 2011), she plunged into another indie film, Gabby Fernandez’s “Mana,” shot late last year.

“Peque recommended me to Gabby,” she said. “Peque called my character the ‘grand dame aswang.’”

She was initially apprehensive about accepting the role, she said. But upon reading the script and learning the identities of the rest of the cast (Cherie Gil, Mark Gil, Jaime Fabregas, Ricky Davao, Leo Rialp, Tetchie Agbayani and Epy Quizon), she had no more qualms about accepting the latest “challenge.”

“My coactors were serious at work and fun between takes,” she reminisced. “Gabby was very considerate. In one scene, I was supposed to collapse, but he had one of the actors grab me before I could connect with the hard floor.”

The indefatigable artist has other projects on the drawing board—including “Amy,” a “meta opera” that she plans to mount onstage and then shoot as a film.

“Amy,” which touches on the Balangiga massacre, World War II and tenuous Filipino-American relations, is a labor of love for her. “It’s important to me and my cowriter Henry Tejero to make a difference in our countrymen’s perception of the present state of affairs in our country. ‘Amy’ is an opera within a musical within a film.”

On top of all this, she is also occupied with the Fides Cuyugan-Asensio Institute of Music and Arts in Teachers’ Village, Quezon City.

A professor emeritus at the University of the Philippines College of Music, she regards her “professional life as a never-ending outreach project.”