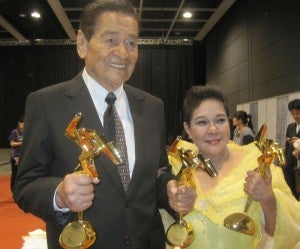 Eddie Garcia and Nora Aunor pose with their awards at the Hong Kong Convention and Exhibition Center where the 7th Asian Film Awards rites were held Monday night. PHOTO BY FERDINAND LAPUZ

In 2009, Gina Pareño won best supporting actress for Mendoza’s “Serbis” at the AFA.

This year’s jury was headed by Cantopop singer-actor Andy Lau, who was voted last year’s people’s choice favorite actor for “A Simple Life.”

The people’s choice favorite actor and actress categories were decided by an online poll among Netizens.

Apart from Garcia and Aunor, Domingo also attended the AFA as a presenter.

Malaysian actress Michelle Yeoh, who starred in the Oscar-winning film “Crouching Tiger, Hidden Dragon” was honored with the “Excellence in Asian Cinema” award.