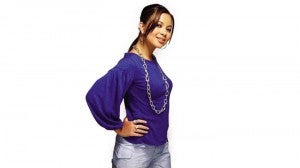 One thing Sitti has learned in her more than 10 years in the music industry is that listeners tend to box an artist in the genre he or she started with and became known in. Also, that experimentation, more often than not, elicits mixed reactions from listeners.

In the mid-2000s, Sitti popularized singing easy-listening tunes that infuses bossa nova and pop—a trend that spawned bandwagoners left and right. But except for “Para sa Akin” and “Contagious,” her hits were mostly covers or revivals.

And so in 2011, the pretty 28-year-old decided to shake things up and dabble in a different sound, coming out with an album that flirts with pop-ballad. Titled “Sessions,” the record has seven original songs, two of which Sitti wrote herself.

Most of her followers were excited about her new music, especially the first single, “Huwag Mo Munang Sabihin,” but a few were skeptical. “I’ve always wanted to release more original material,” she told the Inquirer. “And though I was happy that I could do that at last, I learned that many listeners still wanted me to do covers.”

She added: “I was very happy with the album. But some people were like, ‘Why did you change your music?’ I liked you better before.’”

How did that make her feel? “Of course, I felt bad because I invested quite a lot of emotion into singing the new songs,” Sitti said.

But in hindsight, she mused, that response was probably just natural since she had made her mark as a pop-bossa nova artist.

Still, Sitti remains grateful that, in a way, she became the face of a music genre foreign to many Filipinos. “As a singer, being able to perform for an audience and record an album are big. So I’m glad I got to introduce something new,” she said.

“But there will always be  pressure,” she said, “because no matter what I do, I can never really dish out authentic bossa nova—I didn’t go to Brazil to study [that music form]. I can just be me.”

After five studio albums, one compilation and two live recordings, Sitti is now with MCA Music, and is planning to release a new album by June or July. “I showed a different side of me in my last album. Now we want to go back to my first love, which is pop-bossa nova,” she said.

The challenge this time,  Sitti said, is to keep the music fresh. And she intends to do this by applying everything she has learned.

“For instance, I’ve found out that my listeners generally prefer happy songs. My last album was good but a lot of the numbers were sad. I think maybe a happy compilation is less tiring to listen to,” she said. “They also prefer warmer tones to percussive beats—they seem to want more feelings and less technical stuff.”

She promised that, with each album she releases from now on, listeners can expect a better-rounded Sitti. “I hope the listeners will be able to discern the maturity in how I attack and deliver my songs,” she said.

Read Next
Fun, humor is key to universality
EDITORS' PICK
16 new COVID-19 patients confirmed to be UK variant carriers — DOH
Acer Philippines welcomes you to its first flagship store
‘Panic buying’ of vaccine feared may lead to oversupply, wastage
Is your company a growth champion? Stand up and be recognized!
No sea row compromises in Sino vaccine talksː Galvez
New Year, New Rediscoveries
MOST READ
Ate Vi’s message to those against ABS-CBN’s franchise renewal
LOOK: Duterte registers for the national ID system
UST students protest dismissal of Grade 12 student
OVP spokesman tells Mocha Uson: Don’t drag us into your nonsense
Don't miss out on the latest news and information.