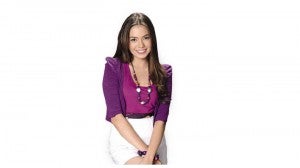 “I’m quite scared [because it] means more responsibilities,” Julia told the Inquirer during her recent launch as an endorser of Your Own Time watches. “But I’m excited because it’s a new chapter in my life.”

Julia got her big break at 15, when she was cast, along with Kathryn Bernardo, in the 2010 remake of the ABS-CBN drama series “Mara Clara.” When the show ended the following year, Kathryn (a year younger than Julia) continued doing teenybopper roles. Julia, on the other hand, went on to portray characters fit for more experienced actresses.

Julia played an abused wife who suffered a miscarriage in “Walang Hanggan,” and, more recently, a prostitute in “Maalaala Mo Kaya (MMK).”

The transition from wholesome to mature roles was  shocking at first, the half-German actress confessed. But for Julia, accepting projects that most girls her age would turn down has improved her acting.

“I felt pressured when the network started offering me roles usually reserved for my seniors,” she said.  “At the same time, it was flattering that they trusted me with those.”

For the “MMK” role, Julia said, she observed prostitutes in several night clubs, taking note of how they conducted themselves. “I treated it like a school project,” she said. “Challenges make me happy.”

She meant to immerse herself in the character so much that—if it wasn’t for her age—she would have watched a live strip show. Instead, she watched Vilma Santos’ dance sequence in Celso Ad Castillo’s “Burlesk Queen” which, she said, gave her goose bumps. “I watched it to get an idea of how girls in clubs danced onstage. It was enthralling.”

But no amount of study and research could prepare her for the more sensitive scenes she needed to do with a Japanese actor she had just met. The idea of touching a stranger had her trembling all over before the take. “Thankfully, I think my nervousness actually helped,” she said, laughing. “My acting came out more natural as a result. Besides, it’s also true that you learn a lot from these experiences.”

Didn’t her family have reservations about her playing a prostitute? “They had no objections,” Julia said. “All they wanted to know was, if I really wanted to do it—and could I? They understand that I would like to take charge of my personal life and career. I think seriously about my future in this business.”

Her willingness to accept mature roles is fueled by her intention of following in the footsteps of actress Claudine Barretto, her idol. Julia explained: “She’s a versatile actress. She wasn’t boxed into a particular type—she can be good, bad, sensual or crazy. That’s the kind of career I want to have.”

While she’s up for anything challenging, Julia draws the line at doing a sexy pictorial for a men’s magazine. Not to say she is closing her doors forever. Everything has a right time, she pointed out.