Future of Filipino ‘komiks’ still not within reach of ordinary readers 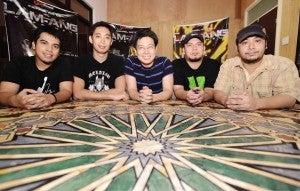 The people of CreaM (Creative Media and Film Society of the Philippines) have created a comic book that could virtually spell the future of Philippine “komiks.”

The breakthrough was not exactly met with fanfare, though. A 56-second video clip showing frames from the graphic novel, titled “The Lam-Ang Experiment,” was posted on YouTube in January 2012 and has, so far, gotten only 1,796 views. CreaM then launched the three-volume book set on May 26 at the Summer Komikon comic convention in Pasig City, with comic book fans and collectors in attendance.

The quality of the illustrations are said to be world-class, matching the graphic novels from the United States and Japan in terms of color, paper, and artwork.

But mainstream society has not picked up on the “Lam-Ang Experiment” just yet. Not even if those responsible for its existence is a team of all-Filipino artists and head writer, the story is purely Filipino in origin, and the book produced entirely in the Philippines.

The big obstacle is the price. At P250 per book (or P750 for the entire set), “The Lam-Ang Experiment” is not within reach of the typical rural comic-book reader. Michael AR Co, who penned the novel as a reimagination of the Ilocano traditional folk tale, revealed that those who downloaded the comic book from Amazon or ordered direct prints from CreaM were moneyed collectors and comic book lovers. The graphic novel is not available in bookstores.

“There are plans for a black-and-white version, so it can be much more affordable to the Filipino youth,” Co said.

The original story of Lam-Ang, as narrated by the blind Ilocano bard Pedro Bucaneg in the early 17th century, tells of the adventures of the extraordinarily powerful and intelligent warrior Lam-Ang, who avenges the murder of his father Don Juan by his

Igorot enemies. Lam-Ang is depicted to have been born fully grown, and immediately able to speak.

It is ironic, though, that a story founded on a centuries-old folk tale would now sound so “alien” to today’s youth.

“It’s sad, as I learned from the 2012 Komikon, that the younger generations are not aware anymore of the numerous traditional Filipino folk tales,” Co stressed, citing examples of such mythological figures as Maria Makiling and Bernardo Carpio. 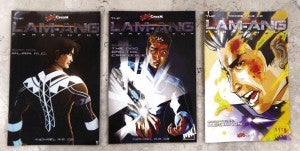 LAM-ANG the comic book is available on the web site Amazon.

Co and a team of CreaM animators, namely Michael Magpantay, Eugene Cruz, Mac Ballesteros and Michael Layug, have “reinterpreted” the heroic exploits of

Co, who was commissioned by CreaM to write the script for the novel, put the setting of a reimagined Lam-Ang roughly a thousand years after Bucaneg’s time, or 500 years into the future.

“The context of the original version is retained in the new version. We just added a lot of science fiction into it,” he said.

Co said science explains how Lam-Ang could have possibly been “born” a grown man. “In the comic book, Alan was a clone, so he was ‘born’ already a fully formed adult.”

Other futuristic adaptations include Lam-Ang’s magic rooster, now a metallic weapon that could wrap itself around Alan’s arm or shoulders, and a pet dog that is now a giant alien companion named Bao.

In Alan’s universe, his home planet is not Earth, but Locus, which is made up of two continents, the North and South.

“We merged the traditional look of Ilocos region with touches of science fiction. The Paoay Church and the Bangui windmills now look high-tech,” artist Magpantay pointed out.

“Ultimately, the ‘Lam-Ang Experiment’ is a classic story about Filipinos who go out and seek their fortunes in foreign lands, and go back home to a changed environment,” Co mused.

Should CreaM turn this into a full-length animation or live action movie, which actor could best portray the swashbuckling Alan MG?