Jim Carrey on being a grandpa, magician 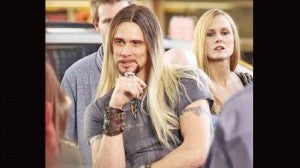 LOS ANGELES—Jim Carrey recently talked to us about being a grandfather for three years now. Jackson Riley was born in 2010 to Jim’s daughter, Jane, and her husband, Alex Santana of the metal band Blood Money. Sometimes, the actor said, “There’s still a little Hollywood ego that goes, ‘What if anybody finds out?’ But I couldn’t be more thrilled. It sounds cliché but, honestly, it’s indescribably joyful to me.”

The comedian added: “It’s these little things that we’re afraid of. You know, ‘Oh my gosh, I don’t know if I can have a kid.’ And now, a grandson! Oh my God, what am I going to do? But these are the things you end up looking at in those times of really personal trials. You go, ‘That’s the reason I’m here.’ Well, it’s great.”

He described one of his joys—reading to his grandson. “One of the most special moments people can have is [being] with their kids at the end of the day. You read that book together… a slice of heaven to me is that moment when you’re both completely absorbed. I’ve always been good at that because I can be all the characters. I can really animate it so I find that, a lot of times, the kid is looking at me instead of the book. It’s really fun. There’s a lot of things I do for him—for instance, acting like a penguin and stuff.”

The grandson’s mom, Jane, joined “American Idol” last year but was eliminated during Hollywood Week. “It was an interesting experience because it was not something I wanted her to do,” Jim admitted. “But she grew up in a different world than [the one I grew up in]. Opportunities for musicians have narrowed down. She said a lot of people think that ‘Idol’ is a major part of the music business now. I said, ‘Okay, I think you could be great on it but they won’t see the whole artist.’ Because her real genius is in songwriting. She’s brilliant. She’s a great singer but her songwriting is incredible. Her lyrics are

Jim continued, “I don’t think I could do that—stand in front of Steven Tyler and sing and be judged. I thought she handled it nicely. She was just up and running and wanting to do it.”

The actor dabbles in music himself. “I get together with musicians who play,” he said. “I wrote a song maybe 25 years ago with a friend of mine named Phil Roy (with John Shanks and Rick Neigher). I wrote the lyrics and the melody to a song called ‘Heaven Down Here.’ It was recorded by the jazz duo, Tuck &  Patti. No one really knows that I wrote that song. The other day I mentioned it to somebody and he went, ‘I’m a Tuck & Patti fan. What are you talking about?’ I said, ‘Yeah, I wrote that song.’ ” 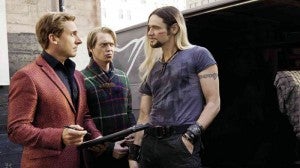 Jim continued: “A lot of these other songs [of mine] are funny. I’m recording a song and doing [a video] shoot with Funny Or Die (a website of funny videos). The song is ‘Cold Dead Hand,’ about the gun issue. It’s kind of a Sons of the Pioneers song, an antigun song.”

Asked about his “fashion statement” at Elton John’s annual Oscars party, in which he wore tiny angel wings and huge prosthetic feet, Jim, who also dabbles in art, smiled and said, “It’s my reaction to public events. I am, believe it or not, a shy person. I find giant gala events to be a bit like being hit over and over with bags of oranges. It’s an intense energy and I’m not comfortable in it. I generally try to [get] into something artistic so that I can feel good. It’s always thought out. There’s always something behind it. It’s not for nothing.”

He revealed the inspiration for that scene-stealing look: “I actually modeled it after a painting I did years ago called “Envy The Perfect Soul.” It’s an angel with giant feet and tiny little wings. That’s how I feel a lot of times, like I have tiny little wings and giant feet. I want to get off the earth and go into a spiritual place but I’m grounded all the time by my own flaws. That’s basically what it signified—my awkward spiritual journey when I can be so blissful and so with God a lot of times and then just turn and get completely caught up in anger. Then I remember that I’m not separate from anybody.”

Latest role
In “The Incredible Burt Wonderstone,” Jim Carrey plays a street magician who becomes a threat to star magicians played by Steve Carrel and Steve Buscemi. The latter two admitted in interviews that they sometimes ended up just watching Jim in awe.

Jim described his Steve Gray trickster character, who has his own share of ego, as representing those who are not loved: “Maybe he wasn’t what daddy wanted. People like that pretend to reject the world that they really want badly. It’s the people who mess their hair for three hours to look like they don’t care.”

Does he know anyone like that? He cracked, “I don’t want to name names but most people in Hollywood.”

He said putting on temporary tattoos for roles has its rewards. “It’s funny because whenever I put on any kind of tattoo on my body for a part, whoever might be at home goes, ‘Just leave it on for tonight.’ That kind of thing. Girls like tattoos.”

Sporting those tattoos and long hair changed his original approach to the role, according to Jim. “When I heard about that part, I went, ‘That’s rock and roll, man.’ But when I put that wig on, I realized that it was a different guy completely than we had  planned. The director said, ‘Oh my God, it’s incredible. Who is that?’ Which was what happened  on ‘Lemony Snicket’s…’ too. Often, the characters were changed 10 minutes before I went in front of the camera—a strand of hair, any little thing can change a person’s personality completely. When I put that wig on, suddenly the director said, ‘Who is it?’ I said, ‘This is a guy who thinks he’s superior to everyone, that their tiny brains amuse him. He’s a manipulator and constantly tries to undermine the confidence of the people around him. He seems to be rejecting what they do but he really just wants what they have.

On his diet to achieve that super fit look, Jim shared, “I joke that I was eating antimatter at that point. That’s not necessarily the healthiest place to be to get washboard abs but it’s good for my jug band.”