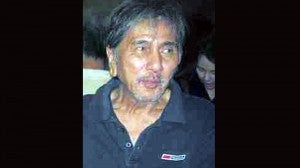 Filmmaker Danny Zialcita, 72, passed away on Sunday, according to industry insiders. News of his death was brought up during a meeting of the Nagkakaisang Manggagawa ng Pelikulang Pilipino on Tuesday.

Actor Rap Fernandez posted the news on his Twitter account. Viva head Vic del Rosario  confirmed the news, hailing the late director as a “genius, a creative force.” Ronald Arguelles, channel head of Cinema One, said Zialcita received a lifetime achievement award from Cinema One in 2009.

Zialcita was known for glossy adult dramas like “Gaano Kadalas ang Minsan” and naughty sex comedies like “May Lamok sa Loob ng Kulambo,” and for introducing singer Sharon Cuneta to the movies via the 1981 teen romance “Dear Heart.”

In a 2010 interview with the Inquirer, Zialcita said he often shot films without a script. “I lost the chance to direct Sharon’s second movie, ‘PS I Love You,’ because the producers (Viva) wanted me to direct with a finished script.”