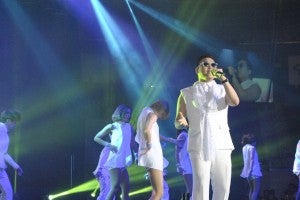 SEOUL–South Korean rapper Psy said Friday he would release the highly-anticipated follow-up to his global hit “Gangnam Style” in April, and hold a large concert in Seoul to mark the occasion.

Psy, sporting his signature sunglasses, announced the planned release in Korean and English in a video uploaded to YouTube, which featured subtitles in Chinese, Thai, Spanish, French, Portuguese and Indonesian.

“April 2013 is a new single, worldwide all at the same time. And I’m gonna do a concert… you can see it live, on YouTube. Just for you,” he said before launching into new dance moves for the remixed version of “Gangnam Style”.

Psy is currently touring Australia after a tour in Latin America and released this week the four-song “Gangnam Style” remix album featuring US rappers 2 Chainz and Tyga.

Tickets for the concert titled “Happening” will go on sale on March 11, his agency said, adding the event will feature the new song as well as his past hits.

The 35-year-old star, whose real name is Park Jae-Sang, was pushed to global stardom after “Gangnam Style” — a satire of luxurious lifestyle in an affluent Seoul district — went viral on YouTube and topped charts worldwide.

The video, featuring his signature horse-riding dance, has clocked nearly 1.4 billion views on the video-sharing site.

The singer has been awarded one of South Korea’s highest cultural honours, the Okgwan Order of Cultural Merit, and performed last month at the inauguration ceremony of new president Park Geun-Hye.