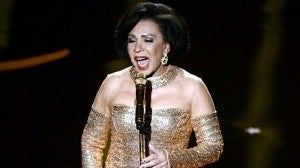 To celebrate the 50 year milestone of the James Bond film franchise, legendary singer Shirley Bassey was invited to perform “Goldfinger” at the 2013 Academy Awards. Shirley Bassey is credited with some of the most recognizable and identifiable theme songs attributed to the Bond films: “Diamonds are Forever”, “Moonraker,” and “Goldfinger.” These theme songs have become classics and will forever be associated with James Bond.

At the recently concluded 85th Academy Awards, the 76-year old Welsh singer gave a most amazing and riveting performance of “Goldfinger” that was met with an equally deserved standing ovation. Her advanced age didn’t affect her performance because it obviously shows that she has gone to great lengths to take care of her voice and to preserve those “powerful pipes.”

To have Shirley Bassey perform one of the all-time great theme songs of any Hollywood movie–and not only of the James Bond film franchise–was indeed appropriate and befitting for such a prestigious event like the Academy Awards. It also felt a little surreal to actually see her perform because growing up I would hear these songs and at the time I wasn’t sure who sang them but I, however, immediately knew when I would hear those songs, it was from James Bond movies. Her performance that night was certainly a definite treat for anyone lucky enough to have been in attendance at the Academy Awards and for televiewers like myself who never got to see her perform at the peak of her career.

Shirley Bassey’s voice sounded whole and the intonation was still there. Clearly, she was even a better performer back then in the prime of her career. Imagine that? But when you are speaking from the standpoint of this time and with the backdrop of the kind of singers we have now, honestly, compared to a lot of the other younger singers who also performed that night, her number was the best.

If she was that good at 76-years old, what more when she was younger? It really got me interested to do a little digging and researching to see the differences between her performance of “Goldfinger” at the Academy Awards and her previous performances of that song in the past decades.

I found them to be practically the same. In my opinion, a lot of singers who were present that night were taking mental notes and keenly observing the performance of Shirley Bassey. The fact is that she performed better than all of them did. 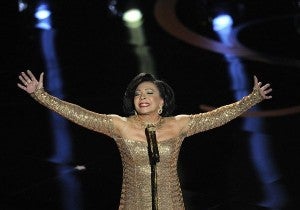 Sometimes, it really doesn’t matter how old you are and whether you are up there in age already. There are a few things that you can’t gain/acquire without years–and what more decades–spent in a profession. These are the experience, knowledge, and finesse that Shirley Bassey displayed that night.

I bet not a few people thought she didn’t have it anymore or that she didn’t have the “lung power” to belt out those high notes. However, when she did her signature rising crescendo at the end of her performance of “Goldfinger”, that impressive showing silenced the critics and wow’ed the audience on hand.

It was the icing on the cake of what was a short performance that showed why Shirley Bassey’s voice has become so synonymous with the James Bond films. People still remember those theme songs she sang. That is proof of the impact these songs have made in popular culture–that to this very day–these songs are still remembered fondly. That night Shirley Bassey looked like a real winner to me.