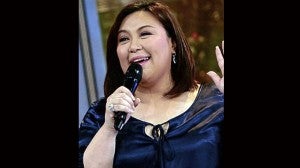 NAGA CITY, Philippines—Movie star Sharon Cuneta was in Camarines Sur Wednesday to give support to a fellow actor, Aga Muhlach, who is running for a congressional seat in a district dominated by the Fuentebella clan.

The megastar, as Cuneta is known, accompanied Muhlach for his so-called barangay (village) visitation, a member of Muhlach’s staff said in a phone interview.

Lawyer Michelle Juan, executive assistant of Muhlach, said Cuneta was in the fourth district of Camarines Sur or the Partido area to meet with supporters of the actor.

Cuneta is scheduled to attend a gathering of women in Lagonoy town’s covered court at 3 p.m. Wednesday and was expected to hold a free concert in Tinambac covered court in the evening evening.

Muhlach is running against Felix William Fuentebella, a scion of the 105-year-old Fuentebella political clan, in the Partido area in the 2013 congressional race.

Allies of the Fuentebella tried but failed to remove Muhlach and wife Charlene Gonzales from the voters’ list in San Jose town, where the couple was registered in March 2012.