For the love of Bella | Inquirer Entertainment
Close
menu
search

For the love of Bella 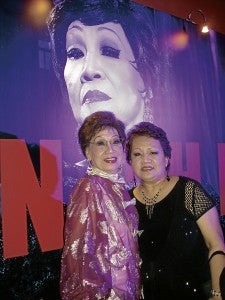 Bella Flores is celebrating her 84th birthday today (Wednesday) in the hospital.

Flores, or Medina Dancel in real life who often played meanies throughout her six-decade career in the movies and on television, is currently confined at San Juan Hospital after her health took a turn for the worse late last year.

“She had a hip-replacement surgery last September,” daughter Ruby Arcilla told the Inquirer. “She also had a stroke and it affected the right part of her brain. That’s why she can’t move, speak and recognize people.”

Flores is in stable condition, Arcilla said. “We hope and pray for a speedy recovery so we can bring her home.”

She expressed her gratitude to show biz friends and coworkers who have reached out to her in her mom’s hour of need.

“Some have extended financial support and we are thankful … but we ask for prayers most of all. Prayers and more prayers for Mama Bella,” she said.

Although she is a much-loathed screen villainess, she is now feted with praise by peers and coworkers in the entertainment industry on her special day.

“For over 60 years, she has remained in the consciousness of Filipino fans as filmdom’s most enduring arch villainess,” said filmmaker Elwood Perez, who cast her in offbeat roles in 1970s films like “Isang Gabi, Tatlong Babae” and “Mahal Mo, Mahal Ko.”

Filmmaker Mark Meily, who directed Flores in the 2003 hit “Crying Ladies,” pointed out: “Although she has been typecast as a villainess, she has a kind heart in real life.”

In previous interviews, Flores would often declare, with more than a tinge of pride, that she had maltreated the country’s most beloved movie queens, from Gloria Romero to Susan Roces, from Nora Aunor to Sharon Cuneta. “I only slap the popular ones,” she said.

Cuneta told the Inquirer: “I feel bad that we may see less and less of her talent. I will pray for her.”

Actress and Batangas Gov. Vilma Santos recalled that Sampaguita producer Dr. Jose Perez and Flores were the ones who singled her out when she auditioned for the movie “Trudis Liit” at age 9 in 1963.

As further proof of her durability, Flores got to share the screen with the latest child star who played “Trudis Liit,” Jillian Ward, when the komiks classic was revived on GMA 7 two years ago.