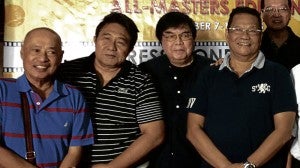 They are uncomfortable about the title “masters.”

For the next edition of the Sineng Pambansa, set Sept. 7-26, the Film Development Council of the Philippines (FDCP) has gathered 12 of the country’s top directors for the festival’s “All-Masters’ Edition.”

Joked Jun Urbano, one of the 12: “Master is just another word for old. I don’t think any one of us would accept that. Seriously, no one has a monopoly on creativity. It just happened that we joined the movies ahead of the younger directors.”

Urbano said his father, the late actor-director Manuel Conde, shared with him the story of his festival piece, “The Winged Gladiator,” about a boy growing up in a pineapple farm in Bicol.

Each filmmaker gets a P1.5-million grant and is urged to find other sources of financing,  which is not an easy task. 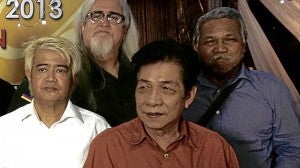 FDCP chair Briccio Santos told the Inquirer it was imperative to engage the country’s masters in “forging a truly national cinema.”

This third edition of Sineng Pambansa, to be held in SM Cinemas nationwide, likewise serves as a fund-raising project for the National Film Archive of the Philippines (NFAP), said Santos. “It’s a golden opportunity,” he said.

Santos hopes the project will generate revenues to help construct a permanent facility to house the NFAP. The FDCP looks forward to commercially viable projects, since the films will be directed by the makers of some of the industry’s biggest hits.

The festival is a comeback for Perez, a hitmaker in the 1980s, who last made a film a decade ago. His movie also heralds the return of 1960s movie queen Amalia Fuentes, who is cast as a wizened author troubled by writers’ block. “Amalia was the ultimate screen goddess of my movie-fan days,” Perez said.

Suzara, who made action flicks with Rudy Fernandez also in the 1980s, will go against type and do a gay romance. Suzara welcomed the masters’ fest because, he said, it gives the struggling movie industry a much-needed shot in the arm.

De los Reyes confessed, “When I do indie films, I usually end up in hock.”

The directors seem ready to make such sacrifices to help build a permanent edifice for our cinematic treasures.

Said Chionglo, “Having this facility ensures that the old 35mm prints and negatives we’ve saved so far will be stored properly.”

Aguiluz added, “Even if there is a change in government, our movies will have a permanent home. We had an archive in the 1980s, under Ernie de Pedro, but it was discontinued.”

Lamangan noted, “A building signifies our noble intention to protect our films from deterioration. After all, our films are concrete documentations of our cultural past.”

Gallaga agreed: “A film archive acknowledges that cinema is a major art form as well as a powerful medium for national and cultural identity.”

“In this era when books and other printed material are stored in microfilm in libraries and museums,” Perez asserted, “it is but fitting for our country to build an archive of its film heritage.”

“After all,” Chionglo concluded, “a national film archive is a national library of our films—open to students, historians and researchers.”