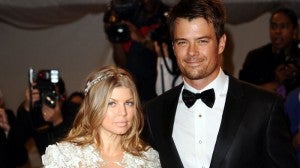 Black Eyed Peas singer Fergie and her husband, actor Josh Duhamel, arrive at the Metropolitan Museum of Art Costume Institute gala in New York in this May 2011 file photo. AP

NEW YORK—Her hump, her hump, her lovely lady lump: Fergie is pregnant with her first child.
A representative for the Black Eyed Peas singer confirmed the news Monday. Fergie’s actor husband Josh Duhamel tweeted about the news with joy, saying: “Fergie and Me and BABY makes three.”

The 37-year-old Fergie and 40-year-old Duhamel married in 2009. She joined the Black Eyed Peas when the group released its third album, “Elephunk,” in 2003. The foursome is known for its pop-inspired hip-hop tunes like “My Humps,” ”I Gotta Feeling” and “Boom Boom Pow.”

Fergie launched her solo debut, “The Duchess,” to much success in 2006. It featured five Top 5 hits, including “Fergalicious” and “Big Girls Don’t Cry.”

Duhamel has appeared in the “Transformer” films and most recently in “Safe Haven.”