Behind that Mona Lisa smile 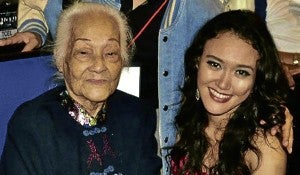 Needless to say, the feisty nonagenarian had a blast watching the musical “Katy,” staged recently at the Cultural Center of the Philippines.

“She (Mona Lisa) reminisced about the old times,” Fabie said. “She recounted that she met Katy and danced with Dolphy on stage during World War II.”

Movie production came to a standstill during the war and her grandmother, like other film actors, had to work in the theater, Fabie recalled.

Today’s generation of movie fans may not appreciate this, but it has to be said: Mona Lisa is a true cinema pioneer.

First known as Fleur de Lis, she starred with Mila del Sol, Ely Ramos and Fernando Poe Sr. in the first movie of big studio LVN, “Giliw Ko,” in 1939—which immortalized her as the first Filipino actress to wear a swimsuit onscreen.

In 1976, she drew raves from critics for her nth comeback as Hilda Koronel’s callous mother in Lino Brocka’s “Insiang.”

Fabie turned to her grandmother in preparing for her role in “Katy.”

“I remembered my lola’s stories while I was doing the musical. She and Katy had similar experiences. They were both close to their fathers. They joined show business to help their families. They were strong-willed as young women. Best of all, they were ahead of their time,” Fabie said.

Fabie is putting the finishing touches on her book, “Mona Lisa: From the Memoirs of a Grandmother,” with the help of her editor, scriptwriter Doy del Mundo.

She hopes to launch the book next month “in time for women’s month.”

While listening to her lola’s stories, she said, she realized “how different the lives of women [were] … then and now.”

Mona Lisa had a child with Fernando Poe Sr., who was her partner in several movies (including “Dilim at Liwanag,” “Datu Talim,” “Palaris” and “Prinsesa Urduja”).

“I couldn’t believe it when she told me that she found out about Fernando Poe Sr.’s first family only after she got pregnant,” Fabie said.

Mona Lisa shared her trials and tribulations with matter-of-fact detachment, Fabie pointed out. “While chatting casually, she would let slip an interesting detail.”

Now 90, her lola, she said, is no longer interested in acting. She has, in fact, turned down not a few tempting offers—some of them from mainstream studios and acclaimed indie filmmakers.

Mona Lisa is more than content watching her granddaughter’s plays and concerts—proud lola that she is.

(“Katy” the musical returns on stage at the Meralco Theater, from July 25 to Aug. 4.)