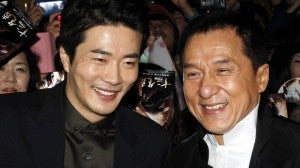 SEOUL, South Korea — Jackie Chan wants his latest film to spread the message about how China’s national artifacts are being looted and sold.

“Chinese Zodiac” or “CZ12” is about a man who finds and recovers 12 bronze zodiac animal heads historically depicted as being looted from China’s Summer Palace by colonialists.

The blockbuster’s director, writer, producer and star, Chan said he was upset after seeing three of the bronzes being auctioned while he lived in Hong Kong.

“I wanted to give you and people around the world a message through a movie” about the looting, he told reporters Monday in South Korea.

Hailed as an action-comedy superstar with Asian and Hollywood success, Chan repeated past remarks that his future films may not be in the action genre.

“I have thought about retiring and in the case of action movies, I think ‘Chinese Zodiac’ may be my last blockbuster-scale action movie,” he said.

Chan was in Seoul to promote the movie and attend its South Korean premiere. The film opened in Hong Kong and the Chinese mainland in December and is gradually appearing worldwide.